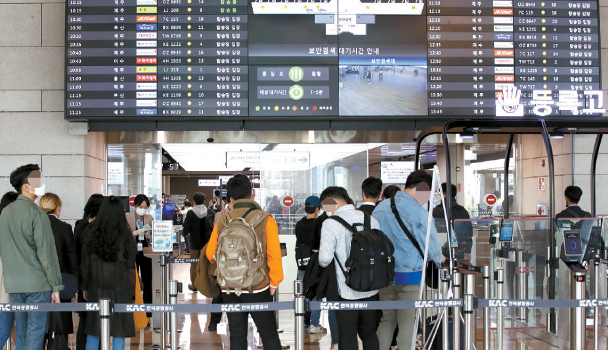 Passengers head to the boarding gates at the domestic terminal at Gimpo International Airport Monday morning. Domestic travel is expected to increase during the May holidays that run from Thursday through Children’s Day on Tuesday, May 5. [YONHAP]

Korea’s skies are starting to get busy again.

Airlines that stopped flying domestic routes due to the coronavirus pandemic are gradually resuming flights ahead of the holidays from Thursday through Tuesday.

Airports in Daegu, the nation’s worst virus-hit region, and Chungju in North Chungcheong have almost recovered their levels of flights from before the outbreak.

The May holidays start on Buddha’s Birthday on Thursday and go through Children’s Day on Tuesday, May 5.

According to Korea Airports Corporation’s Daegu branch, 2,900 people visited the airport on Sunday to take flights to Jeju Island. Starting on Sunday, Korean Air Lines and Asiana Airlines reinitiated their Daegu-Jeju flights, two months after they halted them due to the coronavirus.

Jeju Air and Jin Air also plan to restore their flights between Daegu and Jeju starting Wednesday, a day ahead of Buddha’s Birthday, as demand for Jeju travel traditionally rises during that holiday. Around 40 flights are expected to fly on Wednesday - a similar level as in past holidays.

“The coronavirus is still ongoing, but the passenger load factor is expected to surpass 50 percent,” said a spokesperson for Korea Airports Corporation’s Daegu branch.

Following the outbreak, all flights from Daegu, except for T’way Air’s Jeju flights, were halted. The number of Daegu airport users in March was 22,822, down 94.3 percent compared to the same month a year ago. It was the lowest figure since data on Daegu’s airport started being gathered in 2000.

Airlines are restarting flights from other regions too.

Air Busan is running 40 times more flights on the Busan-Jeju route during the holidays than a week earlier.

Korean Air Lines expanded its Gimpo-Jeju flights by almost twofold during the holidays. Ninety percent of the seats on flights leaving from Wednesday through Friday have been booked.

Regardless of the surge in supply, general demand has yet to recover to last year’s level.

Air Busan’s flights are still only half as many as during “normal holidays,” according to Air Busan spokesperson Park Jin-woo.

“Ahead of the holidays, the passenger load factor normally stands at 80 to 90 percent. The rate during next week’s holidays is only 70 percent. This demonstrates that demand for travel hasn’t completely recovered,” said Park.

Jin Air refused to disclose the passenger load factor for its holiday flights, saying that the company expects the rate to increase a lot just before the holiday starts.

“Although demand during the holidays will peak compared to the past few months, travel demand for the May holidays isn’t as great as it was in the same month last year,” said Jang Sun-wook, a spokesperson for Korean Air Lines.