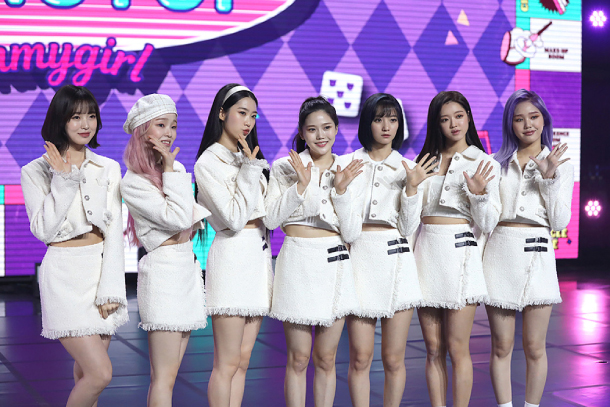 Girl group Oh My Girl poses for photographs before beginning an online showcase for its seventh EP “Nonstop” on Monday afternoon. [WM ENTERTAINMENT]

Has the social distancing got you down? Girl group Oh My Girl has a solution for you: Listen to its new song and play the board game that comes with the EP package.

Oh My Girl released its seventh EP “Nonstop” on Monday, its first release since “Fall in Love,” which dropped last August. To abide by government social distancing guidelines, the members showcased the new release to local press through a live session on YouTube Monday.

“Our album has the theme of a board game, so you can enjoy it like you would a game,” said leader Hyojung. “But the album package actually comes with dice and a board game as well. The photographs are shot using various concepts, so everything is fun to enjoy.”

While the entire EP takes on a bright and bubbly image, the lead and title tracks especially show the girls’ playful side, as they sing the sentiments of a young girl who has fallen in love with an old friend and is confused about her feelings. The complicated emotion is symbolized by the ups and downs people feel while playing the board game, which goes well with the up-tempo dance track and music video, according to the members.

“There’s a teddy bear in the music video, and you have to watch for how it changes throughout the video,” said Mimi. “The teddy bear is the symbol of the complicated feelings toward a friend. It gets bigger and its color changes as well.”

For the new EP, the girls have tried something “new and hip,” not just with their concept, but with their music, hair, makeup and other visual elements. They’d like to show their energy and power - as they did through Mnet’s music competition program “Queendom” which aired last year. Oh My Girl competed with five other female acts and garnered attention from viewers when it flaunted a deeper side to their music, which stood in stark contrast to the bubblegum image it was known for in the past.

“‘Queendom’ really was a cherished memory for us,” said Binnie. “I think through the show, we were able to show that Oh My Girl has a wider range of skills than people think. We realized the strengths we have as well, such as our teamwork.”

The group recently celebrated its fifth anniversary on April 21. They have enjoyed every stage they’ve performed on since, but the members think their experience has allowed them to enjoy themselves more often.

“Six years ago when we debuted with ‘Cupid’ [2016], we were just so nervous and scared,” said YooA. “But now, we enjoy performing on stage as well as going on entertainment shows on TV.”

“We have a harmony like no one else,” added Jiho. “Our members are unique to this group, and together, we make a synergy like no other group. Fans say that it makes them feel good as well, and I think it’s our strongest asset.”