Scientists behind ancient water clock discovered: The Jagyeongnu of Changgyeong Palace is restored, on view

Scientists behind ancient water clock discovered: The Jagyeongnu of Changgyeong Palace is restored, on view 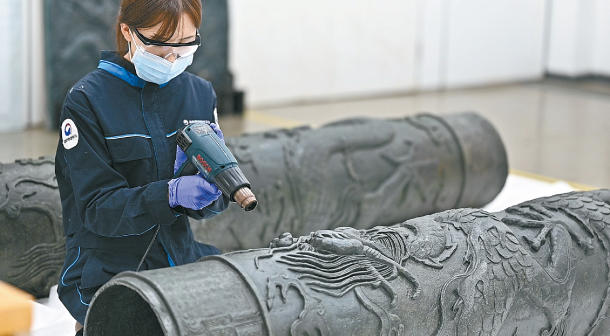 A researcher at the National Research Institute of Cultural Heritage performs a conservation treatment on a piece of the Jagyeongnu. [CULTURAL HERITAGE ADMINISTRATION]

Archimedes, Sostratus, Faraday, Galilei, Newton and Einstein are among the scientists and engineers remembered for their inventions and brilliant minds.

But there were probably hundreds, if not thousands, of others with inventions that never made history, at least in our memories.

Four forgotten scientists from Korea have been brought to light recently when preservation work of a national treasure, a water clock, was completed.

“After a year and seven months, Korea has completed a conservation treatment for the Jagyeongnu of Changgyeong Palace [National Treasure No. 229],” the Cultural Heritage Administration, Korea’s government authority on heritage matters, announced last Wednesday.

At the order of the king, a scientist named Jang Yeong-sil invented Korea’s first water clock that would sound a bell, gong or drum each hour automatically.

That design became what is now known as the Jagyeongnu of Changgyeong Palace. Only two bronze cylindrical water containers and three smaller ceramic vessels of the clock have been preserved, however. 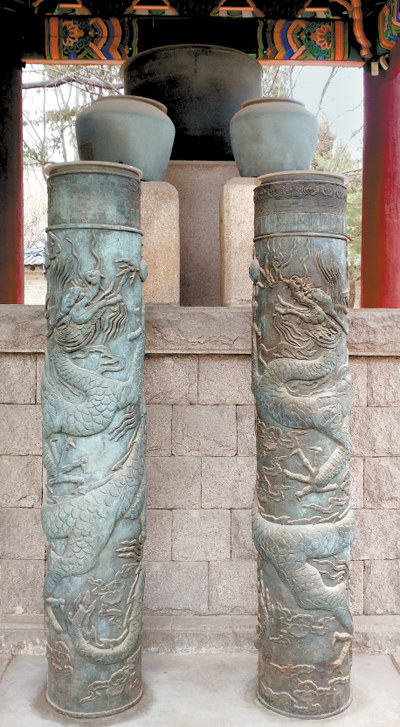 Jagyeongnu, a water clock invented during the Joseon Dynasty (1392-1910) and a national treasure, was kept at Deoksu Palace in central Seoul until 2018. [CULTURAL HERITAGE ADMINISTRATION]

The names of the 12 scientists were inscribed on the cylindrical receptacles of the clock. All but four could be deciphered, until recently.

“As the bronze surface of the receptacles corroded over time, four names came to be buried under bits of gunk, consisting of oil stains and dirt,” said the administration. “After we were able to remove them, we could see the four names more clearly.”

So emerged Yi Gong-jang, An Hyun, Kim Su-seong and Chae Mu-jeok. Their work was being recognized for the first time in centuries.

“All of their names can be found in the records of the Joseon Dynasty,” the administration said. “They were men of noble titles, and three of them - An, Kim and Chae - were astrologists.”

The preserved receptacles and the rest of the remaining parts of the water clock will be on public display at the Gwacheon National Science Museum in Gwacheon, Gyeonggi, shortly, the administration said.

The water clock, which was originally found at Changgyeong Palace in central Seoul, was moved to Deoksu Palace, also in Seoul, during the Japanese occupation of Korea (1910-1945).

From there, as the receptacles showed increasing signs of wear, the Cultural Heritage Administration decided to ask the National Research Institute of Cultural Heritage to take the clock in for preservation work in June 2018.

There, the clock parts underwent a year and seven months of preservation work.

During this time, the institute also scanned the cylindrical receptacles and copied their surface onto a flat silicone material. As a result, they were able to see the full design of the receptacles in one view. 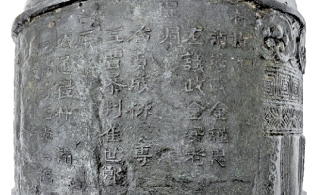 The names of four scientists on a receptacle of the water clock were deciphered upon preservation work. [CULTURAL HERITAGE ADMINISTRATION]

“It was that of a dragon, sketched as if it is rising to the heavens,” the administration said.

The motif is commonly found in traditional Korean paintings and artifacts.

“We found that the dragon images carved onto the surface of the two receptacles are almost identical, except for the face of the dragons and the shape of their whiskers,” the administration said in its statement. “There is a high possibility that the design used wax casting technology.”

Had the full set of the water clocks been preserved, viewers may have had a better look at how the clock would function.

“The water poured into the upper largest vessel goes down via the smaller one into the long water tank,” the administration says in its website. “As the water level rises to the previously set position, a floating rod touches the lever device, which causes a bead at the other end to roll down to hit another bead. This bead, while rolling, triggers many devices to strike the gong, bell and drum or for a wooden puppet to lift up the time notice board.”

Upon conclusion of the exhibition at Gwacheon, the clock will be kept at the National Palace Museum of Korea in central Seoul, located within the premises of Gyeongbok Palace.

Due to the coronavirus outbreak, the museum remains closed until further notice.

Visitors can still tour the palace grounds in Seoul. Check with each palace for their schedules, as some of them are regularly closed on Mondays or Tuesdays.