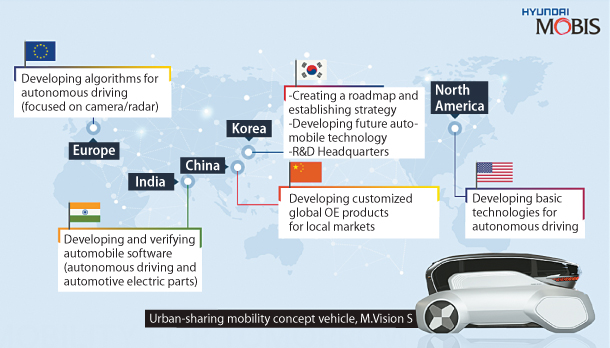 Hyundai Mobis, based in Korea, has established a global research and development (R&D) network that extends to the United States, Germany, China and India. The company employs a total of 5,000 researchers at centers around the world who cooperate closely to become a leader in the future car industry. Through its research centers overseas, Hyundai Mobis’s goal is to reinforce localization in terms of technology development and provide customized products for customers worldwide.

Recently, Hyundai Mobis has built a second research facility in Hyderabad, India, to strengthen its capabilities for automobile software development and secure the stability of its supplies as demand has been growing at an alarming rate.

Hyundai Mobis’s Indian technical center is a research facility that employs 700 local talents specializing in software and ICT and has played a key role in developing and verifying software for various automobiles. Considering its importance, Hyundai Mobis expanded its center by establishing the second facility to secure more development capabilities as well as improve working conditions. It plans to focus on doing more research related to software for autonomous driving through this expansion.

The first center will be in charge of developing in-vehicle infotainment, or IVI; chassis control systems (MDPS, ABS, etc); and airbag control units, or ACUs. Also, it will provide customized products for local consumers.

The newly-built second center will focus on developing control logic along with a recognition algorithm for autonomous driving sensors (camera/radar/lidar). Its strategy is to develop various control logic functions while working on a deep learning-based image recognition algorithm and signal processing algorithm to increase the accuracy of autonomous driving sensors. The new center will also develop software performance improvement tools to improve the overall reliability of the sensors. This tool could provide a database, enabling researchers to successfully analyze radar and lidar data effectively, which will lead to advancement in its technology.

Other technical centers are also making an effort to develop innovative automobile technologies. The North America Technical Center located in the United States has successfully developed Departed Driver Rescue and Exit Maneuver, DDREM, systems which monitor the condition of the driver and guide the vehicle to safety.

The Europe Technical Center in Germany focuses on algorithms for parts such as cameras and radar for autonomous driving. In China, the center has concentrated on introducing customized products in the local market and developed a smart key technology which enables the vehicle to start with facial recognition.

With its R&D efforts at technical centers in different countries, Hyundai Mobis won contracts for automobile parts worth $1.7 billion in 2019 and plans to get contracts for work worth $2.7 billion this year.