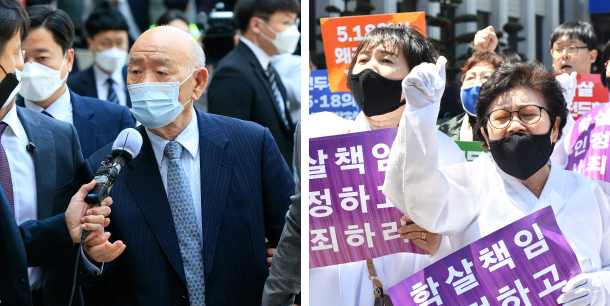 Chun Doo Hwan, Korea’s authoritarian leader in the 1980s, made a rare appearance on Monday in the southwestern city of Gwangju, where pro-democracy protesters were massacred by his military, to attend a libel trial as a criminal defendant.

Chun, 89, left his residence in Seoul in the morning and arrived at the Gwangju District Court around noon. The former president was accused of defaming a late Catholic priest by denying his eye-witness account of the military’s bloody crackdown on pro-democracy protesters in Gwangju in 1980.

As protesters gathered to hold a demonstration to denounce Chun in front of the main gate of the court building, he entered the building from the rear gate under police escort. His wife, Lee Soon-ja, accompanied him.

About 10 protesters, whose family members were killed during the Gwangju massacre, waited for Chun by the rear gate. “You must apologize!” one of them shouted at him. “A murderer doesn’t deserve human rights!” another said, while yet another demanded that Chun must be executed.

Chun gave no response. He also did not answer any questions from the media.

Chun was charged with libeling the late Father Cho Pius, a key witness of the Gwangju uprising of May 18 to 27, 1980, which called for democracy and an end to Chun’s junta. Cho, a religious leader and democracy activist who died in 2016, testified that the military had opened fire on protesters from helicopters during the crackdown.

Chun published a memoir in April 2017 largely defending his authoritarian presidency. Chun called Father Cho a “shameless liar who does not deserve the title of a religious priest” and “Satan wearing a mask” in his book.

Within days of publication, the family of the late priest filed a criminal complaint to the prosecution accusing Chun of defaming the dead, which is a crime in Korea. Chun was indicted by Gwangju prosecutors in 2018.

After attending the initial arraignment, Chun skipped other sessions of the trial, citing his poor health conditions, including a claim that he suffers from Alzheimer’s disease.

The court, however, ordered him to attend Monday’s hearing, as the presiding judge of the trial was changed. Laws governing a trial require a defendant to undergo an arraignment again when a new judge takes over the case.

Judge Kim Jeong-hun was newly assigned to preside over Chun’s trial, as the previous judge quit to run in the general elections.

Chun asked that his wife be allowed to sit next to him because of his fragile mental and physical condition, and the court agreed.

Catholic Priest Cho Young-dae, the late Father Cho Pius’s nephew, said Chun must apologize and seek forgiveness from the victims. “We hope for a fair judgement from the new judge based on countless testimonies and evidence,” he said.

The protesters continued their rally outside the court building after the hearing started at 2 p.m. They also placed a statute, portraying Chun in a military uniform and tied up, in front of the court building.

Chun was prosecuted in 1996 on charges of conspiracy and insurrection to hold him accountable for the Dec. 12, 1979, military coup and the deadly crackdown on the 1980 Gwangju uprising. Although he was initially convicted and sentenced to death, the punishment was later reduced to life imprisonment in appeals trials. He began serving jail time in April 1997, but his sentence was commuted by President Kim Young-sam in December 1997 on the advice of incoming President Kim Dae-jung, an iconic democracy advocate.