The South Korean government on Monday held a ceremony to reconnect its railroad system to the North’s, marking the second anniversary of the inter-Korean summit at Panmunjom in 2018.

South Korea’s railway on its eastern coast, called the Northern East Sea Line, will be extended by a total of 110.9 kilometers (69 miles) from its current northernmost point in Gangneung all the way to Jaejin Station in Goseong County, Gangwon, the last stop on South Korean territory below the military demarcation line with the North.

Unification Minister Kim Yeon-chul, who led the ceremony, in an opening address called the construction of the railway a “Korean Peninsula New Deal” project meant to “inaugurate a new age in which the continent meets the ocean.”

Transport Minister Kim Hyun-mee said Seoul would finalize the project’s blueprint by the end of this year and “push through the initiative with speed” with the goal of breaking ground by the end of next year. 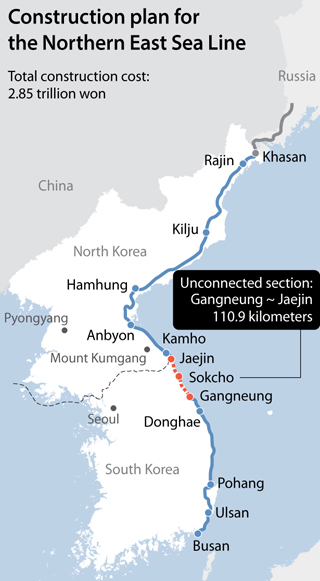 Seoul estimates the construction of the new railway will cost around 2.85 trillion won ($2.32 billion), though a more detailed feasibility study needs to be conducted.

According to an impact study conducted by a government institute, the new railroad project will generate 4.74 trillion for the Korean economy and create 38,910 new jobs.

“When a continental railroad system is completed in the future, in which Busan Harbor will be connected to the Eurasian mainland, this railroad line will serve as the foundation for the creation of a Northeast Asian economic community through which there will be cooperation in the fields of transport, logistics and energy,” read a Ministry of Unification press release.

The project is designed to revive and complete a railroad that used to run through the eastern coast of the Korean Peninsula during Japanese rule. A section was put out of operation during the 1950-53 Korean War. Though the railroad between Gangneung and Jaejin was never fully operational, the line was officially shut down in 1967 due to persistent military tensions between the two Koreas in the area.

Under the so-called “Sunshine Policy,” South Korea’s liberal governments attempted to revive the project, connecting the two countries’ rail networks both on its eastern and western coasts.

A railway between Jaejin Station and the North’s Kamho Station in Kangwon Province was completed in 2005, while the western Gyeongui Line leading from the South’s Dorasan Station to the North’s Kaesong was finished in 2003.

But a rapid deterioration of relations since left the project in indefinite limbo until 2018, when South Korean President Moon Jae-in and North Korean leader Kim Jong-un agreed to revive the project in their first summit at the truce village of Panmunjom on April 27.

The two sides went as far as to hold a groundbreaking ceremony for the project in Kaesong in December of that year, but a breakdown in denuclearization talks between Pyongyang and Washington in February 2019 left the project’s future in doubt.

Seoul’s decision to restart the project on its own account - even without a quid pro quo from Pyongyang - represents South Korea’s attempt to keep the momentum of the peace process alive amid growing uncertainty over the nuclear negotiations.

In a public address delivered at a meeting with aides Monday, President Moon Jae-in explained his government’s rationale for moving forward with inter-Korean initiatives.

“The reason we were unable to move forward with the implementation of the Panmunjom agreement was not because we lacked the will, but because we could not overcome the international limitations that realistically exist,” Moon said.

“But we cannot just wait for conditions to improve; we have to find and realize all the things we can do under these realistic limitations, no matter how small.”

The railroad project is the type of action Seoul can take on its own, Moon stressed. Connecting the eastern and western railroads and transforming the demilitarized zone into an international peace zone were goals that remained at the center of his administration’s agenda, he said, adding that he hoped the North would reciprocate in some way.