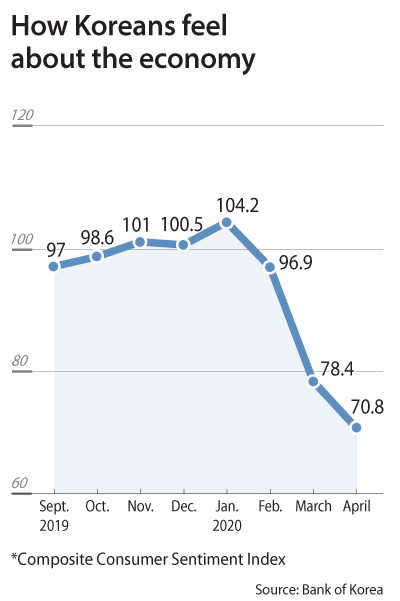 Consumer sentiment in Korea hit an 11-year low in April due to the economic reverberations of the coronavirus crisis.

The Bank of Korea (BOK) said Tuesday that the Composite Consumer Sentiment Index (CCSI) was 70.8 in April, a 7.6 point drop from the previous month. It was the lowest figure since Dec. 2008, when Korea was caught in the global financial meltdown.

The CCSI is a key economic indicator that gauges how optimistic people feel about the country's economy. A reading below 100 means that there are more pessimists than optimists.

Of the six CCSI sub-indexes, sentiment about current domestic economic conditions experienced the biggest plunge of 7 points from March’s 38 to April’s 31. Sentiment about current living standards slid by 6 points month-on-month to 77. Attitudes about their future incomes fell from last month’s 87 to 83.

“Consumer sentiment in Korea was on a downward trend for three consecutive months due to the impact of Covid-19 on economic activities,” said the bank. “However, the range of the fall in April was reduced compared to March when the virus’ global spread was in full swing.”

The index for March stood at 78.4, plunging by 18.5 points or a whopping 19.1 percent compared to the month before. Since January’s 104.2 - when the virus was still confined to select regions in China -- the index has fallen by 33.4 points as of April.

Due to government-led regulations to curb real estate investment and prices, sentiment about housing prices in the future fell by 16 points month-on-month in April from 112 to 96. This index is not one of the six main sub-indexes under the CCSI. It is the biggest drop since Jan. 2013 when the bank started compiling the data on real estate.

Koreans should brace for worse news in the second quarter, according to President Moon Jae-in.

“The economy is in state of war,” Moon said at a policy meeting held Tuesday. “The second quarter is expected to perform worse compared to the first quarter, which recorded minus growth. … Since it is going to take longer time for the global economy to recover from the recession, we
should focus on stimulating the domestic economy as a starting point.”

Korea’s economy shrunk 1.4 percent in the Jan.-March period compared to the quarter before. On a yearly basis, growth was 1.3 percent.

Moon urged government departments to speed up the issuance of shopping vouchers among other policies designed to encourage consumption in Korea.