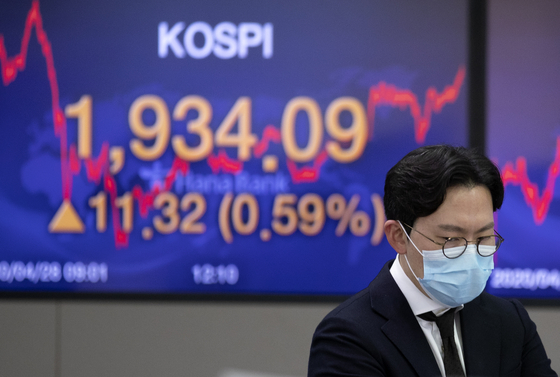 The screen in the dealing room of Hana Bank in Jung-district, central Seoul show the benchmark Kospi for April 28th. [YONHAP]

Stocks closed higher for the second straight day Tuesday amid hopes for an economic rebound, while the won gained ground against the dollar.

The local stock market opened higher, taking a cue from overnight gains on Wall Street. Investor sentiment was also boosted by efforts to help the local economy get back on track.

The index shifted into negative territory briefly but closed higher as individuals scooped up large-cap shares on hopes that the government is inching toward boosting economic activities.

President Moon Jae-in has called for swift and decisive policy action to revitalize the economy hit by the Covid-19 pandemic, as Asia’s fourth largest economy is planning a multitrillion-won extra budget to boost domestic demand.

“Hopes for an economic recovery and the Covid-19 outbreak slowdown pushed up the local market,” said Lee Kyung-min, an analyst at Daeshin Securities.

Most large-cap shares were mixed.

The local currency closed at 1,225.2 won against the U.S. dollar, up 1 won from the previous session’s close.

Bond prices, which move inversely to yields, closed higher. The yield on three-year bonds added 0.9 basis point to 1.034 percent, with the return on the benchmark 10-year government bond added 5.8 basis points to close at 0.66 percent.