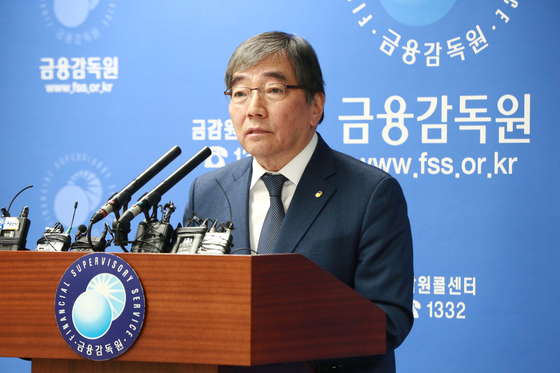 The chairman of the Financial Supervisory Service, Yoon Suk-heun gives a press briefing on January 23. [YONHAP]

As he enters his third year as the chairman of the Financial Supervisory Service (FSS), Yoon Suk-heun stands by sanctions imposed on two of Korea’s largest financial institutions, believing they will serve as deterrents for other banks selling high-risk funds to unsuspecting investors.

Yoon, whose term began in May 2018, said he wanted to send a message to financial firms that they must strengthen protections for investors seeking high-risk funds amid low interest rates and slow growth in Korea.

“Korea’s finance has long been inconsiderate of consumers, so I wanted to change the paradigm,” said Yoon through an emailed release.

The financial watchdog has come under fire recently, with critics accusing the agency of arbitrarily imposing heavy penalties on the chairmen of Woori Financial Group and Hana Financial Group for selling high-risk derivative-linked funds (DLFs) to investors without properly informing them of the risk. Investors, many of whom were elderly people, incurred massive losses last year after the funds shed hundreds of billions of won.

Handed down in February, the FSS sanctions ban the executives from working at financial companies for at least the next three years. They were seen as unnecessarily extreme measures by some industry insiders, given that banks were already rolling out compensation plans to their customers as requested by the authorities.

“Even if the clock reversed back to that time, I would make the same decision,” Yoon said.

Yoon, however, admitted that handling the DLF fiasco was the biggest crisis since his appointment.

The latest speculative investments on high-risk exchange traded notes (ETNs) tracking crude futures should also be curbed, the chairman added.
“Investors want a breakthrough amid abundant liquidity and low base rates, with limitations on real estate investments,” he said. “Financial firms need to come up with mid-return investments to neutralize the situation, but the industry, especially capital and investment industries, are not doing so well with these.”

On Tuesday, four types of ETNs tracking crude futures were suspended from trading in Korea once again after they lost more than 50 percent of their value, worth 154.4 billion won ($126.3 million), on Monday. The trading is scheduled to resume on May 4, according to the Korea Exchange.

While the coronavirus pandemic exacts a heavy toll on the global economy, Korea isn’t doing as bad as other countries, according to Yoon. The IMF predicted the world’s economy to contract by 3 percent this year, while the forecast for Korea stopped at a mere minus 1.2 percent.
“Korea with minus 1.2 percent growth can be seen as [the country] putting up a good defense. But this is not over,” he said.

Should the pandemic fallout extend further, Yoon said the role of banks will become even more important.
“Right now, the government is like a firefighter putting out an urgent fire, but once the fire starts to fade out, the responsibility is handed over to banks,” he said. “Their resilience will play an important role.”

Banking the old-fashioned way is defended by FSC