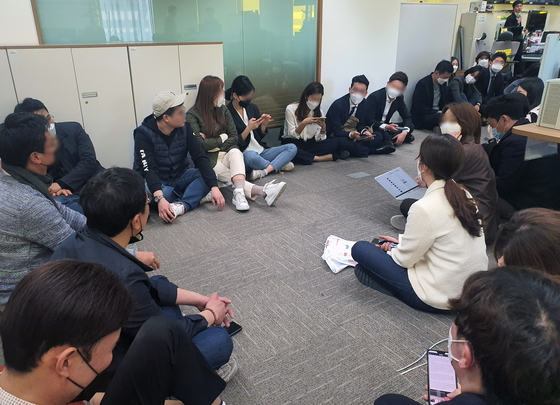 Channel A reporters stage a sit-in at their offices in central Seoul to protest a raid by prosecutors over allegations that one of the company's reporters colluded with a prosecutor to frame a liberal media personality. [NEWS1]

Prosecutors on Tuesday raided the offices of Channel A, a private broadcaster accused of colluding with a prosecutor to take down a media personality friendly to the current administration.

The raid marked the first time in three decades that prosecutors have raided the headquarters of a media company.

Reporter Lee Dong-jae from Channel A, a subscription television network owned by the Dong-A Media Group, one of Korea’s largest media conglomerates, is accused of threatening Lee Cheol, an executive convicted for violating finance laws, to obtain incriminating information on Rhyu Si-min, a liberal pundit with close ties to the Moon Jae-in administration.

Public broadcaster MBC last month carried a story that alleged the reporter told Lee Cheol that he had the backing of Han Dong-hoon, a senior prosecutor at the Busan High Prosecutors’ Office and close ally of Prosecutor General Yoon Seok-youl. 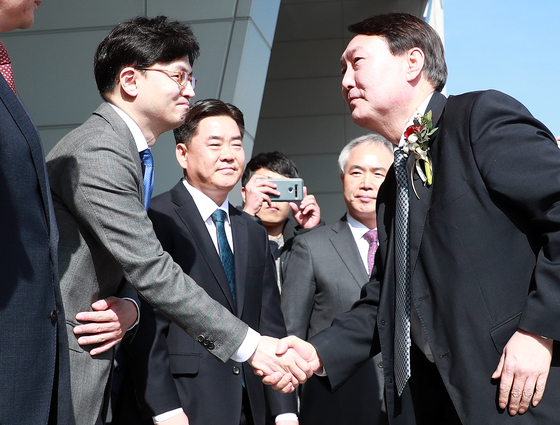 Prosecutor General Yoon Seok-youl, right, shakes hands with Han Dong-hoon, a senior prosecutor at the Busan HIgh Prosecutors' Office and one of his close allies, during a visit to Busan in February. [YONHAP]


Channel A’s CEO, Kim Jae-ho, admitted to the country’s media watchdog Korea Communications Commission this month that the reporter had indeed sent a letter to Lee Cheol and told a representative for the executive, who is currently in jail, that he would be able to persuade prosecutors to lighten their sentencing recommendations for Lee Cheol if he cooperated with Channel A’s reporting.


The issue exploded as it corroborated widespread allegations of collusion between the state prosecution service and the media ? practices highlighted as serious breaches of journalistic ethics ? amid the ruling party’s continuing drive to reform the prosecution service.

Lee Dong-jae’s claim to Lee Cheol that he had a close relationship with Han and was aware of the progress of a prosecutorial investigation raised allegations that the prosecutor may have purposefully leaked information to the media. According to MBC, the reporter told Lee Cheol’s representative that he had spoken to Han over the phone and had obtained the prosecutor’s consent to put pressure on Lee Cheol.


Liberal media personalities also claimed the Channel A reporter’s attempts to solicit Lee Cheol into incriminating Rhyu represented an attempt by the prosecution to silence a prominent voice supportive of the Moon administration’s prosecutorial reform.


Rhyu is head of the Roh Moo-hyun Foundation, a former health minister, and one of the most prominent liberal figures to speak out against deep-rooted practices of prosecutorial misconduct in Korea.

A representative of Lee Cheol, who is a former member of a political party run by Rhyu, told MBC of the reporter’s actions and provided an audio recording of a phone conversation between Lee Dong-jae and Lee Cheol. The whistleblower also claimed the Channel A reporter had him listen to an audio recording of Lee Dong-jae’s phone conversation with Han.

The Citizens’ Coalition for Democratic Media, a civic group monitoring media practices in Korea, filed a criminal complaint to prosecutors against Channel A earlier this month.


The prosecution service’s decision to raid Channel A’s offices and Lee Dong-jae’s home on Monday may be seen as an attempt by the agency to crack down on supposed collusion with the media. Prosecutor General Yoon reportedly ordered the investigation himself.


But MBC’s decision to the run the expose may also put the broadcaster within the prosecution service’s crosshairs. Choi Kyung-hwan, a former deputy prime minister convicted of corruption, filed a criminal complaint against MBC for the broadcaster’s allegation, based on Lee Cheol’s testimony that Choi had attempted to invest in a company in which Lee Cheol owned major shares.

Building a republic of prosecutors (KOR)