Amid a global recession and an increasingly competitive job market, more applicants are building career experience at smaller companies before applying through open recruitment at the larger firms.

More people are applying for open recruitment after having some work experience instead of joining a company right after graduating from college. A retail affiliate of Lotte Group recently made headlines by selecting an entry-level employee aged 34 years old.

According to a survey conducted by job portal Incruit last weekend, the average age of new college graduates as of 2018 was 30.9 years, a more than five-year increase from 1998, when the average age was 25.1. 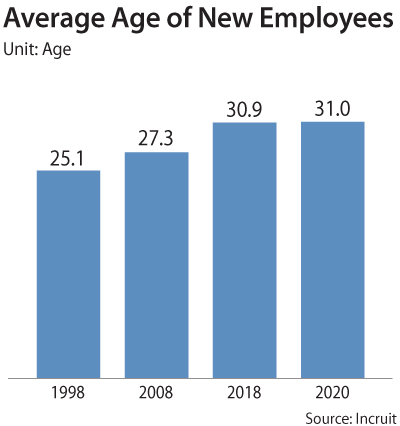 
A 32-year-old who declined to provide his name said he joined SK Innovation in January 2018 at the age of 30 as the second oldest of about 140 employees who were hired along with him. When he graduated from college in the United States in June 2013, the man started a Chinese restaurant and ran it for about two and a half years in Korea. After completing his mandatory military service, he then applied for the company’s open recruitment.

“My varied work experience may have helped in the process of open recruitment,” he said. “I feel that there are many new employees like me who have past experience in other companies.”

More recruits have job experience
Social and economic changes are responsible for this shift in the recruiting culture. Ever since the current administration started pushing “blind recruiting” in 2017, it naturally became difficult to filter out relatively old job applicants.

The rate for employment at large companies can be as competitive as 500 applicants per opening, due to sluggish job creation. Without having a range of job experience, applicants face low odds of securing a position.

Adapting to work culture
The office culture is also changing as more new employees are getting older. Assistant manager-level employees have become more hesitant to give orders to new employees of a similar age. However, the awkward situations caused by age have decreased significantly compared to the past, as the workplace culture has shifted to working only during work hours and forming less personal relationships between employees after work.

The biggest advantage of recruiting experienced workers is that they already have a sense of how to work and can start working immediately. And particularly in industries that require employees to leave the office for marketing work or other additional duties, experienced workers have an edge in the competition.

Experienced employees tend to prefer open recruitment over positions for experienced workers. “It’s hard to recognize less than three years of past job experience as a career,” said Mr. Chung, who only gave his surname. He moved to one of SK Group’s flagship affiliates last year after working at one of the top 10 major group affiliates for about two and a half years. “So it’s easier to join the company through open recruitment because the employment scale is bigger and you can receive systematic job training.”

However, this makes it difficult for small- and medium-sized companies because they constantly lose their workers to large companies after training them.

“Not only did the coronavirus outbreak minimize the size of employment this year, but also the new telecommuting culture prompted many companies to reduce the scale of their hiring,” an anonymous executive in charge of personnel affairs at one of the top five conglomerates said.