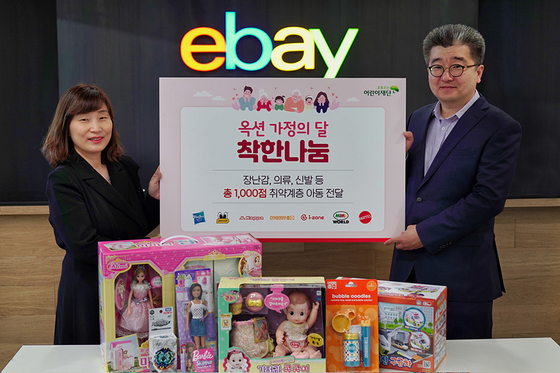 
Korean companies are showing off their altruism for Children's Day, announcing a variety of donations to struggling youngsters.

E-commerce firm Auction, operated by eBay Korea, on Monday announced it donated 1,000 toys, clothes and shoes it received from eight brands to ChildFund Korea, an organization specializing in children’s welfare.
Toy companies Mimi World and Gymboree are among the eight donors.
Auction said it will send the items to the individual addresses of a list of children provided by ChildFund Korea.
“We are grateful to be able to share as an open market that connects sales and purchases,” a company spokesperson said in a statement.
Another e-commerce operator, TMON, has opened a social donation campaign to help a child named Joon-seo who is fighting a skin disease.
TMON on Monday said it will accept donations through Thursday.
The donations will be spent on the boy’s surgery on his legs, medicine to relieve inflammation and his cost of living.
TMON previously created social donation campaigns with the goal of helping children from low-income families and underprivileged sick children. In March, TMON donated 16.62 million won ($13,550) to provide face masks to children.
“TMON social campaigns will lead in supporting households in need of help,” said TMON CEO Lee Jin-won in a statement.
Lotte Chilsung Beverage on Monday announced its volunteer group will donate tactile books it made to a school for children with visual impairments on Children's Day. It will also deliver environmentally-friendly soaps shaped as animals and toys to promote hand washing, the company said. A total of 100 books and soaps are to be donated.
“The donation is meaningful in that employees and their families took part in making [the donated goods],” said a spokesperson for Lotte Chilsung Beverage in a statement.