A man in his 30s was hit and killed by a car while riding a scooter in the rain in Haeundae, Busan, on April 12. He was unlicensed and crossing a crosswalk when the signal was red.


Two days later, a woman in her 30s hit a flower bed and fell while riding an electric scooter near Seomyeon, Busan. She was not severely injured but was arrested for driving while intoxicated.
Personal mobility devices just don’t seem to belong anywhere. Driving on a road with cars is dangerous for personal mobility users, but allowing the devices on bike paths or on sidewalks is dangerous for pedestrians. The government has announced that it will enact related laws by next year.

Smart city projects are being pushed by the Korean government. They are characterized by efficiently-managed transportation, power, water supply, waste management, education and medical services and utilize data collected via the Internet of Things and other modes of input. The goal is to apply it to actual cities by 2022 by spending a total of 115.9 billion won ($95 million) on research.
Personal mobility devices are key to smart city traffic management.

“We will start demonstration projects at around five transit centers as early as next year,” an official at the Metropolitan Transport Commission of the Ministry of Land, Infrastructure and Transport said. “We will prepare appropriate specifications for each type of mobility device to keep the pedestrian’s safety.”

But it’s not so easy to keep personal mobility users, pedestrians and bicycle riders safe as they compete for space. According to the Samsung Traffic Safety Research Institute, the number of accidents related to electric scooters filed with Samsung Fire & Marine Insurance increased from 49 in 2016 to 890 last year. 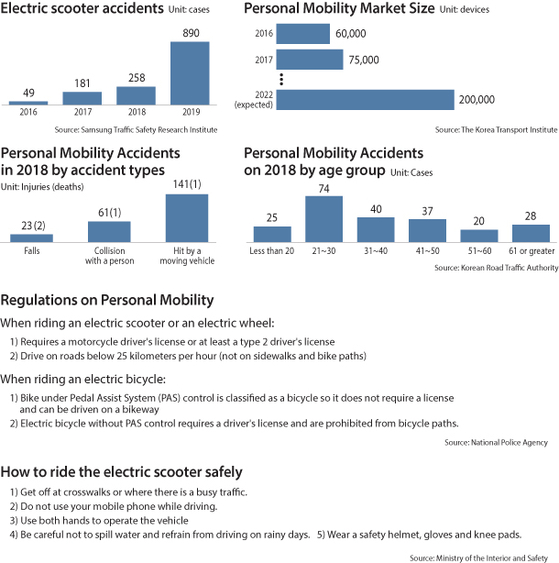 Based on the Korean Road Traffic Authority’s analysis of 225 personal mobility accidents in 2018, 33 percent of the drivers were aged between 21 and 30 years old. In total, 63 percent of the cases involved people being hit by moving vehicles and 27 percent were collisions between vehicles.
In September 2018, a person was killed by a scooter for the first time in Korea. A man in his 40s living in Ilsan was riding an electric scooter without a license and accidentally hit a woman who was crossing the street.

With the market growing and traffic accidents soaring, related laws and regulations leave much unaddressed. Under the current law, electric scooters or electric wheels are classified as motorized bicycles. Riding a motorized bicycle requires a motorcycle driver’s license or at least a Type 2 driver’s license and must be driven at 25 kilometers (15.5 miles) per hour or slower and not on sidewalks or bike paths.

In the case of electric bicycles, only those with PAS control capped at speeds of 25 kilometers per hour can be driven on a bikeway.

Electric scooter users and shared mobility industry officials are asking the government for permission to use the bikeways, saying that it’s too dangerous for electric scooters to be used on roads with cars driving faster than 60 kilometers per hour.

“There are frequent disputes because there is no insurance or registration requirement for electric scooters, and in the case of an accident, the cost cannot be compensated by general liability insurance or driver’s insurance,” an official from the National Police Agency said.


Only allowed on private land

Regulations are tighter in some countries. Paris began to impose a fine of 135 euros ($146) for riding electric scooters on sidewalks after 284 people were injured and five died in electric scooter accidents in 2017.

Britain and Japan ban electric scooters on roads and sidewalks and allow them only on privately-owned land.

“According to the statistics, 87 percent of the people involved in the electric scooter accidents did not wear helmets,” Han Moon-chul, a lawyer, said. “The government should strengthen regulations such as wearing safety gear and giving scooters serial numbers to prevent illegal modifications.”

The government plans to enact a personal mobility act next year to ensure the safety of the riders of electric scooters. The Ministry of Trade, Industry and Energy, the Ministry of Land, Infrastructure and Transport and the National Police Agency got together on April 23 for a meeting presided over by Prime Minister Chung Sye-kyun to set a road map for regulatory innovation.

Considering that personal mobility devices are difficult to drive on roads and are illegal to ride on the sidewalk, the government will review allowing the use of bicycle paths and prepare safety standards.