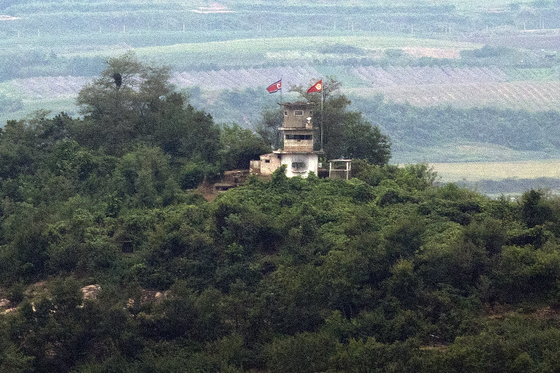 A North Korean guard post at the DMZ at Paju, Gyeonggi. [YONHAP]


The United Nations Command said Monday it would send a team to the demilitarized zone to investigate whether North Korea's military violated the armistice with its gunshots over the border on Sunday.

North Korea fired several rounds at a South Korean guard post in the DMZ in Cheorwon County, Gangwon, at around 7:41 a.m. on Sunday. In response, South Korean troops fired back around 20 rounds, according to Seoul’s Ministry of National Defense.

No one was injured nor were any facilities damaged, but South Korea relayed a message to the North protesting the gunfire as a violation of the armistice treaty that ended hostilities in the 1950-53 Korean War, said the Defense Ministry’s spokesperson, Choi Hyun-soo, on Monday.

Military officials in Seoul said while the North’s gunfire appeared to be accidental, it may have also violated a military agreement signed in September 2018, in which the two sides agreed to cease hostilities at the DMZ.

The incident also took place at a sensitive time on the peninsula, coming only a day after North Korean leader Kim Jong-un surfaced publicly after weeks of absence and speculation on his health.

The bullets appeared to have a caliber of 14.5 millimeters, meaning they likely came from a Soviet-made heavy machine gun commonly used by North Korea as anti-aircraft weapons.

The UN Command, which oversees compliance with the armistice, told Voice of America it would conduct a precise investigation of the incident Monday morning, the results of which would be compiled in a report to be sent to both Koreas’ governments.

Pyongyang has not responded to Seoul’s complaint nor issued an official explanation for the incident, the South’s Defense Ministry said.

Instead, its state media on Monday issued a commentary criticizing the South on what it called Seoul’s “inexcusable crime against the [Korean] nation” for siding with the United States’ “hostile policy” toward North Korea.

“The South Korean authorities talk about ‘peace’ and ‘improvement of relations’ but in reality have put inter-Korean relations in a ditch by fraternizing with foreign powers without a modicum of autonomy,” read a Korean-language editorial on  Arirang Maeri, a propaganda outlet.

“Even regarding the most trivial of inter-Korean matters, it has obsessed itself over obtaining approval from the United States.”

Seoul, it continued, is preparing for a military invasion of the North in accordance with the U.S. hostile policy toward the North, as seen in its augmentation of defense spending and introduction of cutting-edge military equipment like F-35A fighter jets and Global Hawk surveillance drones.

It was not clear whether the outlet’s aggressive condemnation of the South was linked to the shooting at the DMZ, but the incident testified to a continuing freeze in inter-Korean relations since the breakdown of U.S.-North Korea denuclearization talks last year.

U.S. Secretary of State Mike Pompeo, who called the North Korean shots “accidental” on a news program on ABC Sunday, said Washington’s mission with regard to Pyongyang remained unchanged in spite of persistent tensions and that a complete denuclearization of the regime was at the forefront of the U.S. agenda.

As to Kim Jong-un’s well-being, which U.S. President Donald Trump appeared to confirm in a Twitter post Sunday, Pompeo said the images released by Pyongyang’s state media of the dictator on Saturday were genuine.

“It looks like Chairman Kim is alive and well,” the secretary said.