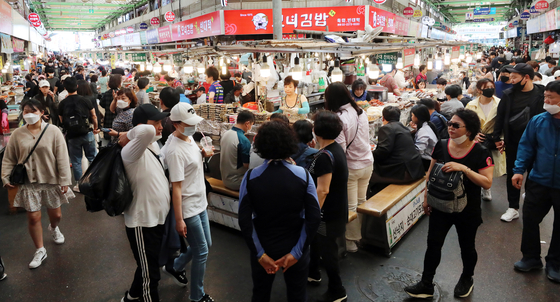 People crowd Gwangjang Market in Jongno District, central Seoul, Sunday, after the Korean central government announced that the current social distancing campaign will end as planned on Tuesday and be replaced with a campaign of looser restrictions. [NEWS1]

Prime Minister Chung Sye-kyun gave the green light for another dial down of the government’s social distancing campaign Sunday, saying Korea is ready to further ease various restrictions imposed due to the coronavirus outbreak.

If everything goes as planned and daily Covid-19 infections remain low, the current social distancing campaign will officially wrap up tomorrow on Children’s Day as initially scheduled, and be replaced by another campaign that comes with looser hygiene guidelines for the public and private sectors.

Korean government authorities have coined the forthcoming system the “everyday life infectious disease control” scheme in a means to encourage members of the public to adopt basic health guidelines in their everyday lives.

Chung, speaking at the central government’s Covid-19 command center Sunday in central Seoul, also hinted at a reopening of nationwide elementary, middle and high schools this month, saying the Ministry of Education was planned to announce specific dates and details today.

Local media speculate high school seniors will be the first to begin normal classes ? with other grades gradually following ? given their busy college admissions schedules.

All elementary through high school students in Korea have been required to learn from home, mainly by taking online courses video-taped by their teachers or by watching EBS (Educational Broadcasting System), the state-run education channel.

If the “stable situation” continues for some time, Chung stressed that the government may lower its Covid-19 alert level from the currently highest “serious,” saying that the Ministry of Health and Welfare will have to discuss the issue further with the Korea Centers for Disease Control and Prevention (KCDC).

There are four levels to the country’s Covid-19 alert system, and the level was upgraded from the third to fourth level on Feb. 23, shortly after a huge cluster of infections was discovered at a church in Daegu.

“Starting from May 6, [the government] will, in principle, allow facilities that had been shut down to gradually reopen, and permit gatherings and events to be held as well so long as they abide by [our] health guidelines,” Chung said in his opening remarks of a Covid-19 command center meeting Sunday.

Responding to Chung’s order last week to also protect the society’s most vulnerable groups, including homeless people and undocumented foreigners, the Covid-19 command center said Friday that the government would postpone crackdowns on illegal foreigners “for the time being,” so they can get tested for the coronavirus without having to worry about deportation.

The command center noted that the central government plans to provide testing consultations in 16 different languages and hand out guidelines to residents of neighborhoods with dense foreigner populations.

An official at the Ministry of Justice said the ministry would not collect personal information from foreigners who show up for testing, eliminating any chances for the ministry to use that data for future crackdowns. 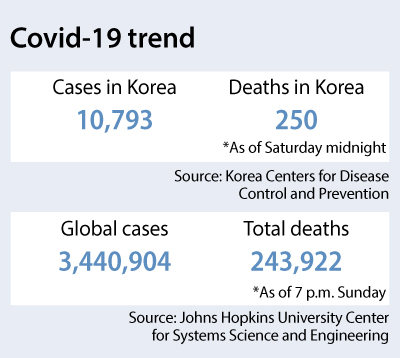 Korea counted 13 new Covid-19 infections Saturday, bringing the total case load to 10,793, according to the KCDC. By Saturday midnight, 250 people had died, while 9,183 people have been declared fully recovered.

Of Saturday’s 13 new patients, 10 were imported cases. Among Korea’s 10,793 total patients, 1,091, or about 10.1 percent, contracted the disease while overseas, mostly from Europe or the United States, KCDC data shows.

Almost all of Korea’s recent infections have been traced to a foreign country as the coronavirus continues to spread throughout the world and more Korean workers and students who had been living abroad return home to escape the outbreak.

Korea reached a milestone in its Covid-19 battle last Thursday when the KCDC announced that only four infections were detected in the nation Wednesday, the lowest figure since the cluster in Daegu led to triple-digit increases in late February. All four cases were traced to a foreign country, meaning no one had contracted the disease domestically, another major feat in Korea’s monthslong fight against Covid-19.

Kwon Jun-wook, director of the National Health Institute, who’s part of the central government’s Covid-19 command center, highlighted last Thursday in a press briefing that health authorities also haven’t found any new infections traced to the general elections on April 15, saying 29 million people across the nation had gone outdoors to place their ballots that day, yet no one seemed to have contracted Covid-19.

But even as Korea continues to report single-digit infections, health officials said Sunday they were afraid people may contract or spread the disease while flocking to popular tourist attractions during the ongoing holidays, especially as local government offices of those destinations have been complaining about tourists not wearing their face masks or keeping physical distance from one another.

Last Thursday was Buddha’s Birthday, Friday was May Day and tomorrow is Children’s Day. Plane tickets for Jeju Island were mostly sold out for the weekends as many people who had planned overseas trips made a detour to Korea’s largest island in the South Sea.

Some 120,000 tourists landed on the island from last Wednesday to Friday, according to data from the Jeju Tourism Organization, about 8,000 more than what Jeju officials had expected. Jeju officials have recorded only 13 coronavirus patients to date, making it the most Covid-19 free province in Korea.

To encourage travelers to wear their face masks, officials have placed face coverings over Jeju’s iconic stone sculptures, the dolhaerubang, throughout the island, yet many people at popular destinations were seen ignoring the warnings when a JoongAng Ilbo reporter went to check out the scene.

Jeju Gov. Won Hee-ryong sternly warned that any visitor to the island who intentionally hides their symptoms of the virus would be pressed against “all administrative and legal accountability.”

Jitters were felt in Daegu as well. The Daegu Traditional Market Service Agency said nearly 50,000 people were believed to have visited the Seomun Market’s nighttime market on Friday and Saturday after it reopened on Friday for the first time since Feb. 21.