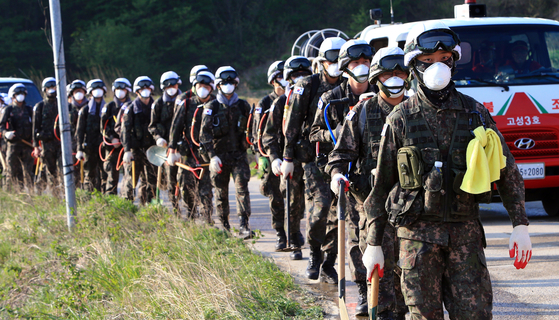 Soldiers walk towards a mountain in Goseong County, Gangwon, on Saturday morning to help extinguish a wildfire that began the previous night. [NEWS1]


No casualties were reported.

The blaze appears to have begun at a house in Dowon1-ri, Toseong-myeon, Goseong, when its 69-year-old owner set some firewood alight to keep himself warm. Firefighters and police said Sunday they were still investigating the cause.

Toseong-myeon, about 160 kilometers (99 miles) northeast of Seoul, close to the inter-Korean border, was among a number of areas that was affected by the huge Gangwon wildfires on April 4, 2019, but authorities said this year’s blaze was much smaller in both size and the resulting damage, mainly due to weaker winds.

Local firefighters said it appears last week’s blaze began at around 8 p.m. Friday from the house in Toseong-myeon before winds of 6 meters (20 feet) per second spread it to nearby mountains. The winds gradually grew stronger, at one point reaching up to 16 meters per second.

Some 2,200 villagers who lived in the vicinity and draftees from the Korean Army’s 22nd Infantry Division evacuated to six different refuge shelters set up by the Goseong County Office. Thirty-eight fire-extinguishing helicopters and over 5,000 people ? including firefighters, soldiers, civil servants and workers from the Korea Forest Service (KFS) ? were mobilized to control the flames.

The blaze was completely put out by Saturday morning.

A forensic team of about 40 members including the police, fire department, National Forensic Service and the Korea Electrical Safety Corporation descended on the house in Toseong-myeon later Saturday for a field study to investigate the precise cause of the fire.

“The owner of the house says the accident was due to his wood-burning heating system, but we’ll have to see the results of our own detailed identification study to be sure,” a firefighter said.

In further analyzing why this year’s blaze was much smaller than last year’s, an official from the KFS explained that authorities were able to focus their fire-extinguishing resources on a single area this year because the fire started and spread in Goseong County, unlike last year when blazes started in three different places around the same time and each spread into nearby forests.

The fact that there was a large reservoir next to this year’s fire was another major help, said the KFS, because helicopters were easily able to fill up their water tanks from there and spray it on the flames, saving travel time.

Last week’s Goseong fire occurred a week after a blaze tore through the mountains of Andong, North Gyeongsang, on April 24, burning 800 hectares of forests in 40 hours. Three houses were damaged, but no casualties were reported.