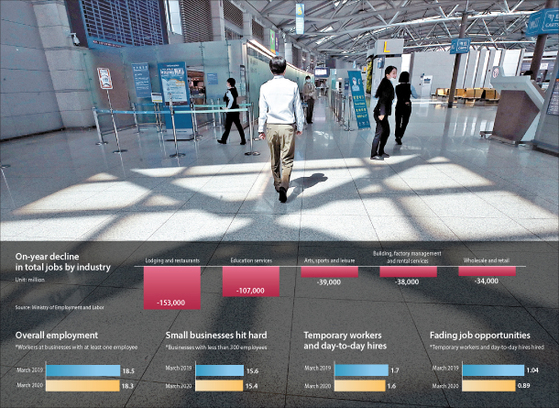 To get a sense of what the future holds for Korea’s employment picture, you don't have to look much farther than Incheon International Airport last weekend.

Even at the start of one of the country’s busiest travel holidays, the departure terminal sat nearly empty, lined with shuttered beverage stands, travel agencies and wireless service kiosks.

Departures at Korea’s largest airport were a mere 1.5 percent of normal numbers, with most overseas flights grounded amid international travel restrictions prompted by the coronavirus pandemic. Incheon International Airport accounts for about 75,000 jobs, of which 25,000 have been lost since the outbreak began, according to the Korean Confederation of Trade Unions. Another 15,000 employees are currently furloughed.

Despite Korea being one of the first countries in the world to see everyday life returning to normal after its virus outbreak, the dismal consumer demand and employment figures point to a difficult road ahead for the country’s economy.

“Depending on the economic situation, a much more serious and harsher unemployment situation could be expected,” said Yonsei University economics Prof. Sung Tae-yoon.

The Korea Economic Research Institute projected that up to 333,000 jobs will be lost due to the coronavirus.

According to the Ministry of Employment and Labor, the number of people hired in March fell to 18.3 million compared with March 2019,
representing a 1.2 percent drop. It’s the first decline reported by the ministry since it began compiling the statistic in June 2009.

The ministry in March spent a record 900 billion won ($737 million) in unemployment benefits, a more than 40 percent on-year increase. New applicants amounted to 156,000.

And in March alone, 587,000 people were forced to switch to a new job. That’s the largest number of involuntary job changes since the ministry began compiling that data and provides further evidence that many employers have been recently forced to cut positions or furlough employees.
Those with little job security face especially dire prospects.

By the end of March 124,000 temporary and day-to-day hires had lost their jobs, compared with a year ago. For those categorized as “non-standard contract employees,” such as freelancers, 93,000 jobs were lost.

Yet the situation isn’t much different for employees working for conglomerates. Mass layoffs due to the coronavirus are already underway.
“The possibility of the job situation continuing to worsen from March is high due to the negative impacts of the global contraction on [Korea’s] exports,” said Park Yang-su, director-general at Bank of Korea’s economic statistics department.

In April, Korea posted a trade deficit, snapping a 99-month streak of trade surpluses, according to the latest government report.

Business confidence has continued its grim slide, falling to its lowest level since the depths of the global financial crisis, according to the Bank of Korea. The consumer confidence index, for which a score of 100 is average, showed sentiment fell to just 50, its worst score since it reached 49 in January 2009.

The international credit score company Moody’s on April 28 predicted Korea’s GDP will decline by 0.5 percent.
Some market experts point out that although the government has laid out several job-related measures, more support is needed, especially programs that help more vulnerable citizens.

Since late April, the government has begun emphasizing job stability.

The government laid out plans for job measures during its fifth emergency economic council meeting hosted by President Moon Jae-in on April 22. Hwang Deok-soon, the Blue House senior secretary for jobs, said during an April 26 briefing that the government will work to create jobs in the public sector to cover for losses in the private sector.

The government has decided to fund 10.1 trillion won in job stabilization programs, along with providing 75 trillion won worth of liquidity for leading businesses that maintain their workforces.

However, experts warn the government’s plan could be a one-time solution, largely because the public sector positions being offered will only last for three to six months.

Additionally, financial aid for those that are furloughed or “non-standard contracted employees” only lasts for three months.
Kim Sang-bong, economics professor at Hansung University, said the government’s current proposals of trying to patch the dismal job figures with public positions are unsustainable.

While the government has proposed a “Korean New Deal,” which will focus on digital technology jobs, it has yet to provide specifics.
Some experts say there is a need for fundamental measures to protect vulnerable workers such as contract workers and day-to-day workers, who are easy to lay off.

It is estimated that the number of non-regular employees, or those who do not have a salaried position, exceeded 7 million as of last year.
Experts have also raised issues over the lack of measures for workers who have been furloughed.

It’s been a month since the first 11.7 trillion won supplementary budget passed the National Assembly. As of April 14, 71.5 percent of the budget, or 7.1 trillion won, have been executed, yet only 80 billion won have been used to subsidize small businesses’ labor costs to help employees keep their jobs.

“We could be facing massive job losses matching those of the 1998 financial crisis,” said Choo Kwang-ho, head of economic policies at the Korea Economic Research Institute. “More innovative and aggressive measures such as extending the approval for longer working hours and more flexible working conditions are needed.”

The Presidential Committee on Job Creation on April 30 proposed taking more aggressive action for the job safety net — especially regarding freelancers and others with no access to unemployment benefits.

Kim Dong-won, a Korea University business management professor, argued that companies’ managers and labor unions will need to work together if the country’s employment safety net is to be effective in the post-coronavirus era.

“The labor union that only demands wage hikes or businesses that only expects increases in government aid in exchange for layoffs is not helping the current situation,” he said. “Without shared efforts by the labor union, companies and the government, the current massive fiscal injection will only be a temporary solution.”