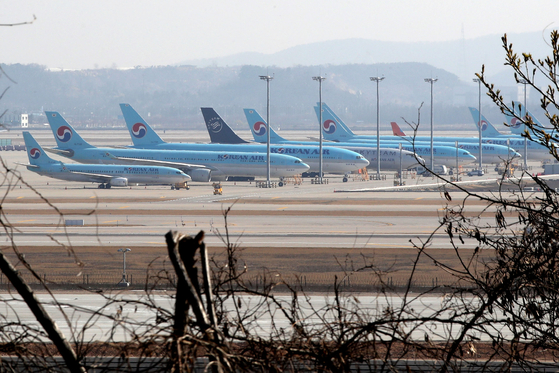 Planes are parked in the ground of Incheon International Airport. From the coronavirus pandemic, only 78,599 passengers used international flights for the last week of March, which was a 95.5 percent drop compared to the same period a year earlier. [NEWS1]

With the coronavirus pandemic limiting travel within and between countries, local airlines are expected to report devastating first-quarter results in coming weeks.

Losses are seen continuing into the second quarter and possibly beyond as the outbreak only started to devastate the carriers in March and continues to keep some countries isolated and in lockdown.

Korean Air Lines, the largest airline in the country, is scheduled to report its first-quarter earnings this week, and it will be followed by Asiana Airlines on May 15 and several low-cost carriers.

“From the Covid-19 pandemic, local and global airlines are experiencing unprecedented losses,” said Kim Young-ho, an analyst at Samsung Securities. “A great turbulence is forecast for the Korean aviation market, which has a total of 11 airlines, from Covid-19.”

According to an analyst consensus published by market tracker FnGuide, revenue for Korean Air Lines in the first quarter is expected to fall 20.2 percent to 2.51 trillion won ($2.1 billion). The carrier is forecast to report a 167.8 billion won operating loss, a sharp turnaround from 140.6 billion won in operating profit from the same quarter in 2019.

The net profit of Korean Air Lines is forecast to report a net loss of 478.7 billion won in the first quarter, compared with the net loss of 61.8 billion won a year earlier.

Some analysts expect operating losses to be lower if Korean Air Lines was able to retask enough of its passenger planes to cargo operation.

The cargo business of Korean Air Lines, which normally generates 20 percent of its revenue, grew 8 percent on year in terms of shipping volume in the first three months as the company used aircraft to export pharmaceutical products and coronavirus diagnostic kits.

Asiana Airlines is on track for similarly weak results. Market trackers expect the airline's revenue in the first quarter to drop 7 percent from a year earlier to 1.6 trillion won. It is expected to report a 163.4 billion won operating loss compared with a 7.2 billion won profit in the same period a year earlier.

The problem is greater for budget airlines, as they have less substantial financial bases and are at greater risk of insolvency. Many of them rely on services to China, Japan and Southeast Asian countries, all of which have greatly restricted arrivals.

Analysts don't believe the industry has reached the bottom yet and that the second-quarter results will be far worse than the first-quarter forecast.

The International Civil Aviation Organization, a specialized agency under the United Nations, predicted last month that the revenue of Korea’s airline industry could drop $5.8 billion in the first half, while total passenger numbers could fall by up to 28 million from an original forecast of 45.94 million passengers in the January-June period.

“The impact of Covid-19 on the airline industry is greater than the impact of severe acute respiratory syndrome or Middle East respiratory syndrome, and as the pandemic spread in sequence from China to Southeast Asia to Europe and North America, the possibility has become greater that the impact will go on for a longer period of time,” said Kim Yu-hyuk, an analyst at Hanwha Investment & Securities.

“The bigger problem is that there really isn’t a solution to this in the short term. Airlines are putting out their own solutions, but most of them are struggling to make ends meet.”

Analysts argue that recovery of demand on international routes is a must and that government funding is needed now more than ever.

The National Assembly passed a bill earlier this month that will allow the state-run Korea Development Bank to create a 40 trillion won fund to invest in industries considered essential to the economy, including automobiles, airlines and steel.

State-run creditors have also provided a total of 2.9 trillion won in loans to Korean Air Lines and Asiana Airlines to lessen the risk of insolvency.