Social media attracts audience, but it's not same as runway show


Fashion weeks are not merely a talent show for designers. It’s more or less the starting point of the fashion industry. Designers present their latest pieces and buyers purchase them to fill up their stores while photographers and reporters keep a sharp eye on the outfits to read the latest trends and foresee what’s to come. Then, celebrities and fashionistas come in to play, dressing themselves up with the latest fads, and others follow suit.

The beginning of this whole process takes place on the runways of fashion weeks held in cities around the globe including Milan, Paris, London, Shanghai and Seoul. However, the fashion industries of these cities have become casualties of the recent pandemic as they were forced to cancel most scheduled shows following the coronavirus outbreak.

According to a recent report titled “The State of Fashion 2020: Coronavirus Update” co-published by BOF (The Business of Fashion) and McKinsey & Company, “80 percent of fashion companies would be in distress after more than two months of store closures” and “the crisis will shake out the weak, embolden the strong and accelerate the decline of companies that were already struggling before the pandemic.”

The organizers of fashion weeks seem to be struggling to come back by finding solutions on digital platforms.

When the outbreak rapidly spread across Europe during Milan Fashion Week, luxury fashion house Giorgio Armani abruptly decided to close the doors of its runway show on Feb. 23 and instead streamed what was going on inside for all to see. For the first time in its 110 year-history, the Parisian design house Chanel also streamed its show online, although it did allow invited guests to come in to see the physical show as well.

But this was only the beginning.

The Seoul Design Foundation also canceled its 2020 Fall/Winter Fashion Week. On Monday, however, the foundation introduced its version of a digital solution in an attempt to support the struggling designers and revitalize the ailing fashion industry. According to the foundation, there are about 49 designer brands that were supposed to showcase their works during fashion week in March. Since they couldn’t come to the Dongdaemun Design Plaza in central Seoul, the foundation has been sending a team of video content creators to the studios of each designer to create promotional videos for their products that were supposed to walk down the runways last month. The videos were then uploaded on Seoul Fashion Week’s various social media platforms including Instagram, Facebook and YouTube. 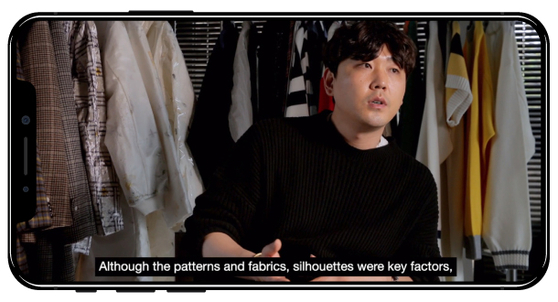 The foundation said it created the videos not to just showcase the outfits, but also included designer interviews with English subtitles so that they could reach global audiences during the pandemic. Indeed, Tiffany Chao, a K-fashion follower living in Taiwan, said she got interested in designer Kim A-young’s brand Cahiers for the first time by watching her video.

“I know many Korean brands and I’ve been to two Seoul Fashion Week shows when I visited Korea,” said Chao. “I was also aware of the brand, but it was only after watching the video and listening to her talk that I got really interested in her dresses, and it made me want to buy them. I think the way she talked about her concept and the brand’s signature style, which fits mine, got me interested.”

Top: Seoul Fashion Week’s official Instagram page introduces designer Ko Tae-yong’s Beyond Closet. Above: Popular model Han Hye-jin said she will hold a digital runway by herself and wear 100 outfits from different local designers to support them. The show will air on May 1. [SEOUL DESIGN FOUNDATION, SCREEN CAPTURE]


Since about 230 buyers from outside the country were supposed to visit Seoul for fashion week, the Seoul Design Foundation decided to send them a “Collection Look Book” of the designers with information on how to contact them if they want to make an order or have an online consultation session.

Designers, who were in agony after months of hard work to prepare for a runway that came to naught, seemed to appreciate the foundation’s efforts.

Lee Moo-yeol, who is behind the brand Youser, said that most designers were happy at the news that the foundation would be creating video content for them.
“We were in a hopeless situation, then this shooting allowed us not only to present the collection but to promote the brand in a new way,” said Lee. “I think my brand philosophy and the concept of this season’s collection came out very effectively through digital content, and since it got uploaded on the various social media platforms belonging to Seoul Fashion Week, I think foreign buyers and the press are showing interest as well. That helps local designers a lot actually.”

Choi Kyung-ran, president of the Seoul Design Foundation said, “Such digital strategies will continue to be implemented to help revitalize the shrinking fashion industry even after the coronavirus outbreak comes to an end.”

Meanwhile, some industry insiders say despite the greatness of the digital solutions in the fashion industry, physical fashion weeks should not disappear.
Yeon Moon-joo, a buyer for Boon The Shop, told the JoongAng Ilbo that “such offline events of designer brands not only act as a platform to make orders for buyers but it’s an event of a total work of art. The industry insiders gather together during this week and witness the space, the music and the vibe created by a certain brand, and that can’t be done in a virtual world. If all these things get skipped and taken to the digital world, buyers will become hesitant to make orders without looking at the physical product hence forth and order a minimum number of clothes, which may ultimately shrink the industry.”