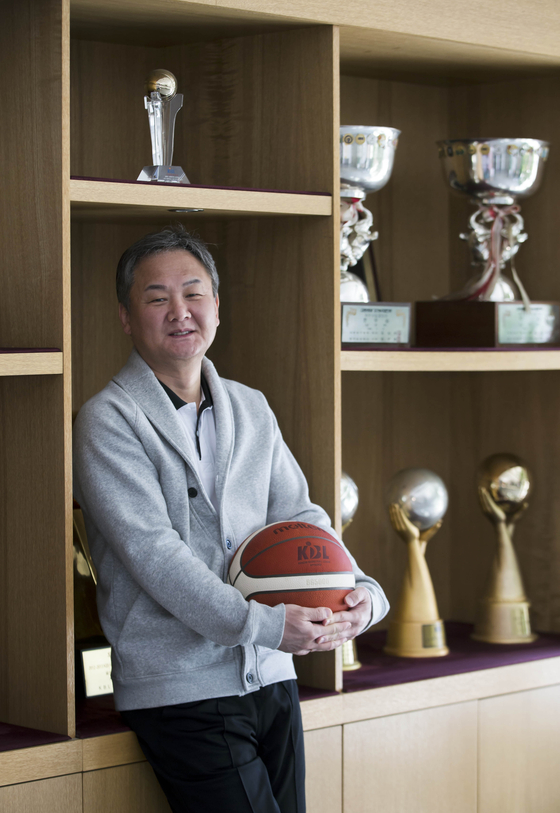 Ulsan Hyundai Mobis Phoebus's head coach Yoo Jae-hak poses for a photo in front of the Phoebus's championship trophies, located at the entrance of its training site in Yongin, Gyeonggi, on April 23. [KIM SUNG-RYONG]


It’s been a month since the Korean Basketball League (KBL) called it quits on the 2019-20 season due to the coronavirus outbreak.

Yoo is on the hunt for foreign players for the upcoming season. He spends his time watching clips of foreign players while his desk is scattered with profiles of athletes from the United States, Spain and Australia, among others.

“The head coach always shows up to work in the morning and watches clips until 5 in the afternoon,” said a club official. “Head coach Yoo’s daily routine is still the same as back when the team was in the season.”

On April 21, the Phoebus re-signed a three-year contract with Yoo. If Yoo fulfills his three-year term, which is until the 2023 season, he will set a new record in Korean sports history.

He will have managed one club for the longest period of time, 19 years and two months.

The current record is held by former Haitai Tigers of the KBO, now call the Kia Tigers, manager Kim Eung-ryong, which stands at 17 years and 11 months. He served as the Tigers’ manager from November 1982 to October 2000.

And taking into account his career with the club so far, it seems like this feat is well within his reach. Over the past 17 years, under Yoo, the Phoebus has won a total of six championship titles.

However, some are worried now that the Phoebus’s Yang Dong-geun, a four-time MVP in the KBL, announced his retirement on March 31, the team may have some trouble in the upcoming season.

Perhaps this is the reason Yoo spends hours in his office watching clips of foreign players: to find a player to replace Yang.

Although the 2019-20 season ended early, the Phoebus was not playing very well anyways. It finished the season in a far from impressive eighth place, with 18 wins and 26 losses, totaling a 0.429 winning percentage. And now that Yang has officially retired, the Phoebus and Yoo are working harder than ever to find an adequate replacement but have decided to employ a different approach.

“When he first joined the pros, Dong-geun wasn’t the best player,” Yoo said. “He started to open up his eyes to basketball in 2005, when he met Chris Williams. Once I find good foreign players, our guards like Kim Gook-chan and Seo Myeong-jin may be able to develop into players like Yang Dong-geun.”

Recently, the Phoebus signed a contract with Shawn Long, who played for the Philadelphia 76ers in the NBA back in the 2016-17 season.
When comparing Yoo’s management style with the Tigers’ former manager Kim, who led the team to dominate the league, neither believe in showing any favoritism toward their star players.

“Back when I took the helm of the Mobis Phoebus, Woo Ji-won was the star player,” Yoo said. “[I excluded him from the starting lineup], but Woo Ji-won received the sixth man award that year. When I briefly left the Phoebus, as I got appointed as head coach of the national team in 2014, I heard that our foreign player Rod Benson spoke back to the coaches. Once I heard that, I kicked him out of the team.”

While he might not show favoritism, Yoo definitely believe in teamwork.

“I’ve heard from elite head coaches that they’ve operated their team and the players very tightly,” Yoo said. “For 16 years, our team has eaten breakfast together. But I’ve never been into any of the players’ rooms.”
Since the moment Yoo was appointed as head coach, he spent years trying to find a balance between regulations and freedom.

Having earned his recognition on the Korean basketball scene by winning the MVP in 1989, Yoo retired early, at just 28 years old.

“I’ve underwent three knee surgeries, but I failed at my rehabilitation,” Yoo said. “The year after [I retired], I coached at Yonsei University. To scout players, I’ve carried high school head coaches’ bags. When I went to restaurants to eat, I would organize the shoes of the players’ parents.”

Despite his hard work and efforts to recruit the best players, Yoo didn’t rely on his ties with the school. He himself attended Kyungbock High School and Yonsei University, but looking at the Phoebus’s best five, there’s not a single player that graduated from the same university.
Only Ham Ji-hoon and Lee Jung-hyun have school ties with Yoo, as they graduated from Kyungbock High School. “If you rely too much on school ties, you can’t work for long,” Yoo said.

Although Yoo’s been maintaining his spot as the Phoebus’s head coach for 16 years, he says that basketball has been changing continuously.
Yoo is known for his skills in defense, even assigning defense areas for his players that are measured in just centimeters.

Yoo is also known for his unexpected trades, such as trading the team’s starting players Lee Dae-sung and Ra Gun-ah with the Jeonju KCC Egis’s Kim Gook-chan and Kim Se-chang.

“I can’t force the old style of basketball on the younger players,” Yoo said.