It has been 60 years since Kim Byeong-yang packed up his belongings and headed to Seoul, roughly 250 kilometers (155 miles) from his hometown in Gwangju, to make his fortune. 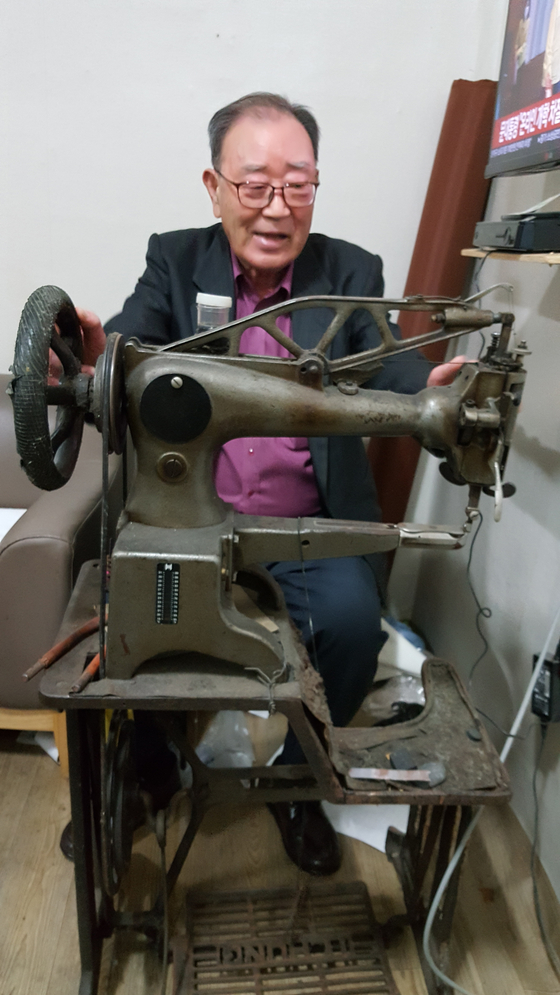 
He made that and history as the owner of the Myungdongstarsa, where generations of Koreans — and particularly the rich and powerful — brought luxury goods for repair. Kim did the repairs personally for such customers as former President Park Chung Hee, who sent his shoes to Kim for repairs.

Kim, 83, maintains a deep fondness for his hometown, which is intertwined with memories of his mother, whom he disappointed by dropping out of school after the sixth grade.

Now, Kim has donated 1.2 billion won ($984,000) to Chonnam National University in Gwangju to help students of a much later generation get a good education.

In a phone interview with Joongang Ilbo in late March, Kim talked of his twisted path to success and his lingering regrets.

“I never really had the brains for studying,” recalled Kim. “Straight after graduating from elementary school, I started working at a factory that produces cooking oil, but my mother told me that I should be studying, not working.”

Kim still remembers his mother’s pained expression. He says he still feels “regret for not studying when he had the chance.”

In the 1960s, at the age of 24, Kim moved to Seoul and started a delivery job. He would buy goods in bulk from Namdaemun Market, one of the primary street markets in Korea, and sell them to various shops in Myeong-dong, already popular for brand-name goods sold at affordable prices.

Over the years, Kim got advice from the merchants by listening to their stories. In a few years, he realized a living could be made restoring luxury goods, specifically leather-based items and dress shoes, which were considered precious in developing Korea.

With a naturally brisk personality and a keen eye for detail, Kim started to get acknowledged for his work. Financial fortune started to follow.

But Kim was not satisfied with being a middleman, buying and reselling goods all his life. He knew he could do better than all the repairmen he had been delivering goods to.

In 1965, one of his customers for buttons and leather decided to sell his shop, the Myungdongstarsa, directly across from the Lotte Department Store.

Kim scraped together his savings and bought the business, keeping the name.

In those times, it was difficult to find anyone in Korea who could restore luxury goods properly, especially goods from abroad with fancy brand names like Gucci and Louis Vuitton. A torn Chanel wallet would mean a trip to the post office and the hassle of sending things overseas for repairs.

Normally, it would take at least three months for such repairs.

When Kim’s abilities became known, the news spread and the well-heeled made a beeline for Myungdongstarsa.

At his business’s peak in the 1990s, Kim had around 30 employees and had developed a fiercely loyal customer base.

A fire tore through a building in which he stored his customers’ goods. But customers accepted the loss of their goods and even offered Kim help to get through the disaster.

Myungdongstarsa is now being run by his daughter, Kim Mi-rye.

Why did Kim donate to Chonnam National University? He’s obviously not an alum, having only finished elementary school.

It turns out, Chonnam is right next to the factory where Kim worked after graduating from sixth grade.

He spent much of his youth playing on the university’s campus, although as an interloper.

Kim notes that a lot has changed.

“There used to be a brick factory somewhere around here,” Kim said as he toured the campus on March 20 to make his donation, “while the rest of the area was pure farmland.”

Kim says it’s too late for him to return to the classroom, but young people in a socially vulnerable position might need help. He figured that the university would know best how to help them with his donation.

“Before I die, I wanted to do something good for the best university in my hometown,” said Kim.

A spokesman for Chonnam said the university is trying to figure out the best way to use the donation and fulfill Kim’s intentions. It is likely that the donation will be used for the university’s new digital library. The library will be open to everyone, including the general public, and all books and documents will be presented digitally as e-books.