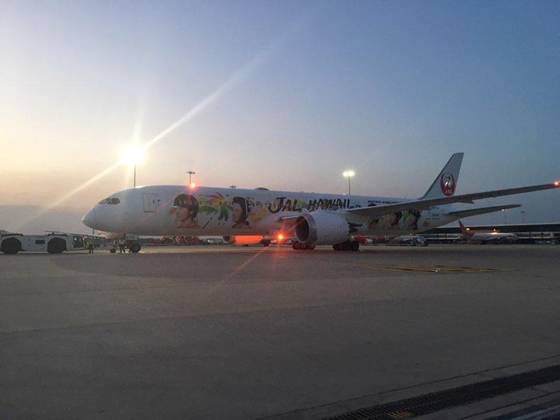 A 5-year-old Korean girl living in India with acute leukemia is able to return to Korea for treatment on a Japan Airlines chartered plane, pictured ahead of departure from New Delhi to Haneda Airport in Japan Monday. [YONHAP]

A 5-year-old Korean girl living in India made it back to Korea for leukemia treatment Tuesday, Children’s Day, with the cooperation of India and Japan, although it was an odyssey.

The child was diagnosed last week with acute leukemia by a hospital near New Delhi, and her condition was deteriorating. Her parents wanted to bring her back to Korea for treatment but couldn't find a flight. India has been under lockdown since March 25 because of the Covid-19 pandemic, and all flights have been suspended.

But help was on the way.

The girl’s plight first circulated on an online forum for Korean residents in India over the weekend. They did their best to rapidly spread the word.
Around 20 percent of Korean residents in India returned to Korea last month through four chartered flights out of New Delhi. Since most got home, there weren’t plans for another chartered flight until the end of the month.

An association of Korean residents in India considered moving that schedule up and tried to book a plane to fly out on May 15.

Meanwhile, one overseas resident started a Blue House online petition for the girl, which quickly got over 3,300 signatories.

The Korean Embassy in India reached out to other missions to search for the quickest route back to Seoul. It turned out Japan was flying out its nationals on Monday.

With the support of the Japanese Embassy in New Delhi, seats for the girl and her family were quickly arranged. This included expedited visa support and coronavirus testing and health checks for the family. The Japanese government suspended visa waivers for Koreans in early March over Covid-19 concerns, a measure reciprocated by Seoul. Japan declared a state of emergency last month and has not been issuing visas for foreigners.

According to the Korean Embassy in India and the Ministry of Foreign Affairs, the girl, her 6-year-old older sister and their mother departed from Indira Gandhi International Airport in New Delhi on Monday evening at 7 p.m. on a Japan Airlines chartered flight heading to Tokyo.

After reaching Haneda Airport Tuesday morning, Children’s Day, officials from the Korean Embassy in Japan helped transport the family from Haneda to Narita International Airport. There, they transferred to a Korean Air flight that departed around 5:20 p.m. and were set to arrive at Incheon International Airport later that evening.

The girl was said to have been in a good condition prior to boarding the flight.

The child was expected to immediately get treatment for leukemia in Korea.

The girl’s 7,000-kilometer (4,350-mile) journey with the cooperation of three countries was a symbol of global solidarity amid the coronavirus pandemic.

People stranded overseas due to coronavirus lockdowns and travel bans have been sharing planes back to their home countries.

Despite continued diplomatic tensions over trade and historical issues, Korea and Japan have cooperated to get their nationals back home. In early April, Korean diplomats arranged for their country's nationals and volunteers from different countries including Japan to fly out of Madagascar and Cameroon. Similarly, in mid-April, several Korean workers in India were able to return home on a Japanese chartered flight.