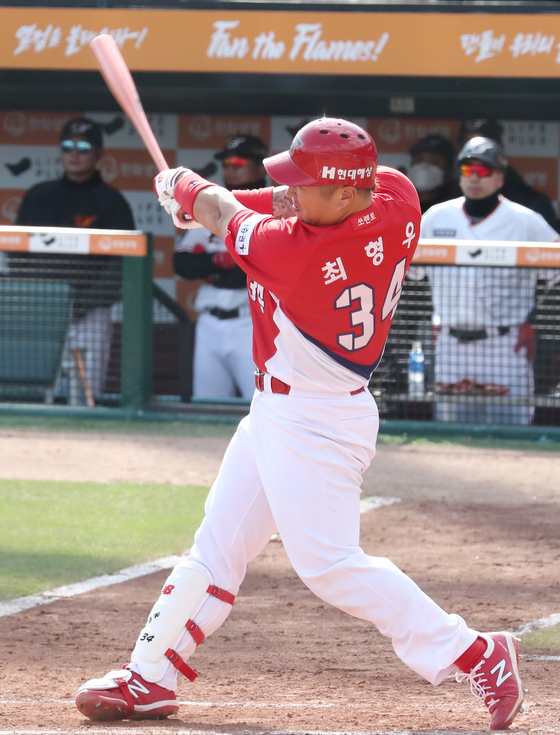 Playing his fourth and last season as a Kia Tiger before becoming a free agent, Choi Hyoung-woo hopes to help the team finish strong this year. [NEWS1]

Entering his fourth and last year of his free agent contract, veteran batter Choi Hyoung-woo of the Kia Tigers plans to show everything he’s got this season.

Choi, who joined the Tigers in 2017 as a free agent, has been preparing for this season as a designated hitter. Throughout his career, Choi has been an outfielder, but this season, considering his age, he is expected to be assigned a new position.

Although there have been a number of players who have signed four-year contracts over 10 billion won since, Choi holds the record for being the first.

Looking back at his past three seasons with the Tigers, he’s proven his consistency by keeping his batting average above 0.300. However his decreasing number of home runs has been disappointing. The most home runs he hit for the Tigers was during his first season in 2017, when he finished with 26. But every year since then that number has dropped.

But he’s hoping to finish strong this season. Considering that he was able to focus more on his batting under new manager Matt Williams and won’t be playing as much defense in the outfield, he should be able to increase his number of home runs.

Looking at his statistics during spring training in Florida, Choi’s recorded a 0.545 batting average with six runs and six RBIs. However, once he returned to Korea, he wasn’t able to continue his great pace as he took an unexpectedly long break due to an ankle injury.

While most were seriously disappointed about the KBO’s decision to delay the season due to the outbreak of the coronavirus, for Choi it offered a golden opportunity. It allowed him to take his time in recovering from his injury and wait until April 13 before making his return to the Tigers. He played in the Tigers’ intrasquad games, and once the KBO allowed the clubs to play practice games against each other, Choi had a 0.235 batting average with one home run and five RBIs.

Throughout Choi’s career, he’s been one of the most consistent players in the league, but the 2019 season has been a disappointing one. He finished the season with a 0.300 batting average with 17 home runs and 86 RBIs. It was particularly tough taking into consideration Choi usually finished his seasons with a batting average above 0.333 and with more than 25 home runs and 100 RBIs since 2014.

As the first player to sign his free agent contract at 10 billion won, he believes that he has to be better than others, always.

The Tigers, who won both the regular season and the Korean Series back in 2017, also struggled as they failed to advance to the postseason by finishing seventh in the league with 62 wins, two draws and 80 losses.

While Choi is always tough on himself, his statistics weren’t all that bad. Also, as the KBO changed the baseball last season, his batting average of 0.300 was considered good for the league.

“If I see those kinds of statistics again, I feel like I’ll be embarrassed,” Choi said. “I don’t have any personal ambitions for the new season. I just want the team to have a great season and then we can all be smiling when the season ends.”

Having made his transformation as a designated hitter, Choi still wants to be out in the outfield, just as he used to be until last season, because he wants to show everything that he has to offer, not just his skills at bat.

However, after realizing that he is not as physically strong as he used to, he’s given up on playing defense.

“Since halfway through last season, I thought I was being greedy about trying to be in the outfield as well,” Choi said. “Now, I don’t think I’ll be of any help if I go out to the outfield. To recover our team and my pride, I’ll follow along the order in terms of my batting order and defensive position.”

Having to sit on the bench while the team is in defense could make it hard to keep his batting pace up, but Choi has been patiently preparing for the season. To do so, he had to make a new routine that was suited for a designated hitter. He said he kept himself sweating by doing lower body exercises.

Now that he’s a designated hitter, Choi’s biggest role is to raise RBIs to bring the runners back home. He was regularly seen as a third batter in the lineup, but he is likely to return to his position as a cleanup hitter.

During the opening day Choi was assigned as the Tigers’ cleanup hitter. Against the Kiwoom Heroes on Tuesday, Choi had one hit with three at-bats.

“Increasing the number of RBIs is what the team wants me to do the most,” Choi said. “If there’s a chance, I’ll make sure to bring them home.”