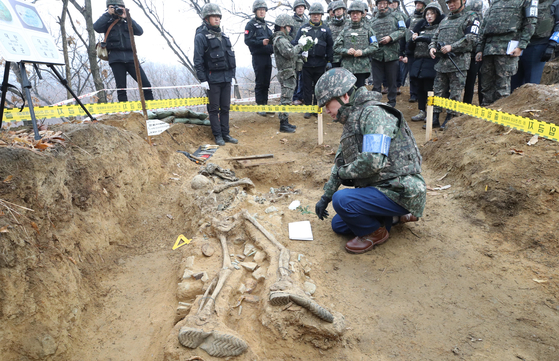 Former Prime Minister Lee Nak-yon kneels in front of the remains of a fallen soldier that were excavated at Arrowhead Ridge in the demilitarized zone (DMZ) last November. [YONHAP]


South Korea will resume its ongoing project to excavate the remains of its fallen troops from the 1950-53 Korean War after delays brought on by the coronavirus outbreak, announced its Ministry of National Defense Wednesday.

Excavations will take place in 36 different areas across the country beginning with seven sites including those in Yanggu County, Gangwon, the ministry said in a press release.

A dig is already underway at Arrowhead Ridge since April 20, as the site is located within the demilitarized zone (DMZ) where civilian access is restricted, the ministry said.

The excavation project, which South Korea conducts every year, was originally scheduled to take place in mid-March, but was delayed due to the rapid spread of Covid-19 in the country.

The project holds particular significance this year, however, as 2020 marks the 70th anniversary of the outbreak of the Korean War, which began with the North’s invasion across the 38th parallel on June 25, 1950.

To mark the occasion, the Defense Ministry plans to obtain DNA samples from 12,500 family members of missing or fallen South Korean soldiers as part of an effort to identify remains. Currently the government holds around 50,000 such samples, but the pool pales in comparison to the approximately 135,000 dead or missing troops from the war, the ministry said.

A center devoted to identifying the uncovered remains will be established by October this year, the ministry said, as part of a drive to enable the government to identify at least around 500 fallen each year.

Advances in technology have also facilitated the ongoing excavation efforts. The ministry said it was looking into implementing a robot designed to detect objects underground, which could help expedite the discovery of remains.

The most scrutinized of these excavations is that at Arrowhead Ridge, a site in the DMZ that was one of the fiercest battlefields of the war.

Around 300 soldiers from South Korea, the United States and France are believed to be buried at the site, in addition to hundreds more from China and North Korea, testifying to the bloody melees that ensued at the ridge in the final months of the war, when the two sides fought to secure further territory before signing the 1953 armistice.

Seoul signed a military agreement with Pyongyang in September 2018 in which the two sides agreed to conduct a joint excavation on Arrowhead Ridge as part of a reconciliation effort. But a freeze in relations following the breakdown of nuclear talks prompted North Korea to opt out, leaving Seoul to conduct the dig by itself starting in April last year.

In a span of around six months, the South Korean military excavated around 2,000 bone fragments belonging to some 261 soldiers killed in the war. Seoul’s Defense Ministry hopes to make further strides in uncovering more remains this year, having additionally deployed an engineer battalion to the dig to expedite the project.

South Korean President Moon Jae-in, who has emphasized the importance of the excavation project numerous times throughout his term, expressed his hopes late last month that the two Koreas could come together again to “wash away the wounds of the war and move forward toward a new future of peace.”

A dangerous test for soldiers