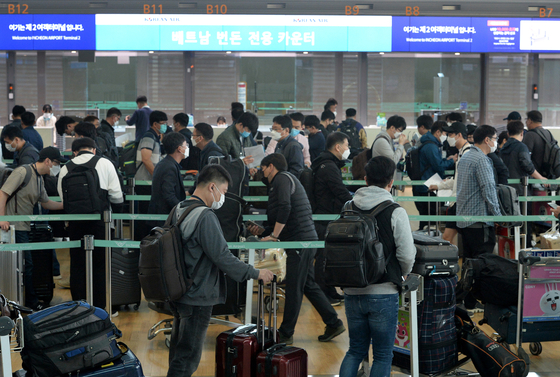 A group of 340 Korean businesspeople from 143 companies line up to depart from Incheon International Airport on chartered flights to Vietnam Wednesday after special entry procedures exempted them from a travel ban. [YONHAP]

A group of 340 Korean businesspeople from 143 companies departed for Vietnam Wednesday with special entry permits exempting them from a coronavirus travel ban.

This was the largest group of travelers from Korea accepted by Vietnam in a single day since its national lockdown began.

The Koreans departed on two Korean Air chartered flights at 9 a.m. and 1 p.m. from Incheon International Airport to Van Don International Airport in Vietnam’s Quang Ninh Province, according to the Korean Ministry of Foreign Affairs. They work for 127 small- and medium-sized companies, nine large conglomerates and the finance and public sectors.

Many are considered essential personnel for plant construction, factory operations or management.

All of the Korean travelers have tested negative for Covid-19. After arriving in Vietnam, they will be issued with entry visas and forced to spend 14 days in quarantine in hotels. They will be able to resume activities starting May 13.

Vietnam has successfully contained the coronavirus through an early response and quick national lockdown. Since April 16, it has reported no new Covid-19 cases.

On Feb. 29, Vietnam suspended visa-free entry for Koreans. Starting March 22, it has blocked the entry of all foreigners to the country. Since the beginning of April, Vietnam has blocked all foreign air carriers.

However, Seoul has negotiated with Hanoi to allow special permits for Korean businesspeople to enter the country.

Vietnam has previously granted case-by-case permits for groups of businesspeople from large Korean conglomerates like Samsung Display and LG Electronics.

Wednesday’s departures were the first case of Vietnam accepting a group of over 100 businesspeople from small- and medium-sized companies from any country, said a senior Foreign Ministry official.

The official said, “Taking into consideration that small- and medium-sized companies may have difficulties negotiating smaller-scale business trips, we received applications from many companies and received a package entry permit.”

Industry Minister Sung Yun-mo saw off the 340 businesspeople Wednesday and met with representatives of companies at Incheon International Airport.

With a population of some 97 million, Vietnam has 270 confirmed coronavirus cases, of which 220 have fully recovered, and zero deaths, according to the Vietnamese government.

Korea saw a peak in its coronavirus cases in late February, but through extensive testing, contact tracing and isolation, it has flattened the curve. For the past 11 days, it has reported less than 15 cases daily.

The Korean government has consulted with 21 countries on special entry permits and has so far enabled 3,020 businesspeople to travel to eight countries, according to the Foreign Ministry.

They will be issued visas by the Chinese Embassy in Seoul and will have to present government-certified health documents proving they are virus-free. They will need to undergo up to two days of isolation in a Chinese government-designated facility while again being tested for the virus.

China banned the entry of foreigners on March 28, though Beijing has been issuing limited visas.