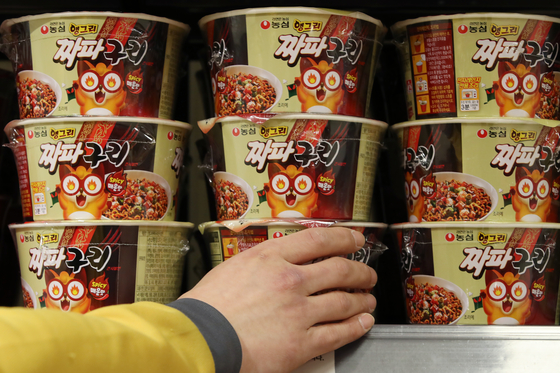 Jjapaguri instant noodle that was featured in the film Parasite, which won the Oscar for Best Picture earlier this year stacked on a shelve at a discount mart in Seoul April 21. Thanks to the Korean film's popularity ramyeon export rose. [YONHAP]


Despite the coronavirus outbreak dealing a heavy blow to Korea’s exports, it turns out ramyeon, or instant noodles, and kimchi exports have been strong.

Ramyeon exports have been particularly strong following the featuring of two local products in "Parasite" (2019), which won four Oscars.

According to the Ministry of Agriculture, Food and Rural Affairs, Korea’s agriculture exports in the first four months of the year increased 3.8 percent to $2.38 billion.

Ramyeon exports surged 34.5 percent during the same period to $194 million.

With the release and Academy Award victory of Bong Joon-ho’s instant classic, Korean ramyeon makers have been marketing aggressively in YouTube and elsewhere.

The ministry said it has been actively promoting kimchi, with the product being showcased at K-food fairs held abroad.

Exports of Korean agriculture and food products to Europe, Asean and the European Union increased. Exports of these products were particularly strong to the United States, with the total rising 35.3 percent.

In these markets, kimchi and ginseng still remained popular, with exports rising. Sales of fresh produce and alcoholic beverages to these countries dropped and pulled down exports overall.

The Korean government said it plans to promote and distribute Korean agriculture and food products overseas given changes in consumption due to the pandemic.

It will expand online and mobile export consulting for overseas buyers, which it did for buyers in China last month, to other markets, including the United States, Japan and Vietnam.