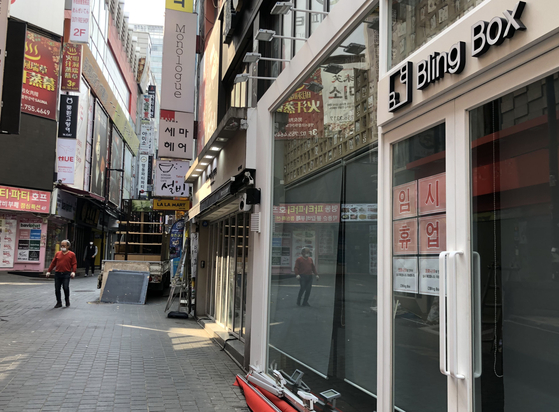 Stores closed in the popular tourist destination in Myeong-dong, censtral Seoul, on Wednesday. Small stores have been closing shops due to the coronavirus outbreak. [YONHAP]

The coronavirus pandemic put a dent in Korea’s services sector in March, but manufacturing held up.

But the government warned that the numbers will be much worse in April as the pandemic’s effect on Western economies including the United States is felt.

According to Statistics Korea on Wednesday, the country’s services sector in March fell 5 percent over a year earlier, the biggest decline since data started being compiled in its current form in 2000.

Even when compared to the previous month, services shrunk 4.4 percent, also an all-time record.

Restaurants and lodgings were hit hard, tumbling 32 percent on a yearly basis. That’s a sharper drop than February’s 14.6 percent.

When compared to the previous month, the restaurant and lodging sector shrunk 17.7 percent.

The arts, sports and leisure business segment was hit even harder, declining 46 percent compared to a year earlier and 31.2 percent month-on-month as people have curbed such activities.

The impact of the coronavirus was also seen in a significant drop in consumer spending.

However, a monthly comparison showed some improvement. Consumer spending in March only fell 1 percent compared to the month before, while February’s figure was 6 percent lower than January’s.

However, output from the mining and manufacturing sector in March grew 7.1 percent compared to the previous year, slower than the 11.3 percent growth in February.

When compared to the previous month, mining and manufacturing output grew 4.6 percent in March, a turnaround from a 3.8 percent decline in February as many companies struggled due to the shutting of plants in China.

Automotive production when compared to a year ago grew 3.7 percent. Month-on-month it surged 45.1 percent.

However, the statistics agency warned about the impact of the virus on figures for this month.

“We expect the impact of the economic shutdown of major export markets including the United States and Europe in April to appear in April’s statistics,” said Ahn Hyung-joon, head of Statistics Korea’s short-term economic statistics.

The situation could turn around starting in May. Ahn added that government emergency grants, which will be given to every single household in the country, will improve May’s statistics.

As small shops are particularly hurt by the coronavirus, the government announced that it will provide more financial support.

“We will design 10 trillion won [$8.2 billion] or so in a second financial aid program for small shops,” Finance Minister Hong Nam-ki said Wednesday. “We plan on providing the aid in May.”

The support, according to the minister, will be unsecured loans provided by six leading commercial banks with interest rates ranging between 3 to 4 percent.

The loans will be guaranteed by the state-owned Korea Credit Guarantee Fund.

The maximum amount that small shops can borrow is 10 million won.

The intended recipients of the support are small shops with low credit scores.

The government last month offered 12 trillion won in loans with low interest rates of 1.5 percent. That was increased to16.4 trillion won.

The second batch of financial aid is intended for small businesses.

“The impact of the novel coronavirus is on sentiments, the real economy and employment,” Hong said. “A concentration of all government departments is necessary in countering the crisis, which is much stronger than any crisis in the past.”

Rice harvest increases for the first time in six years, up 10.7%