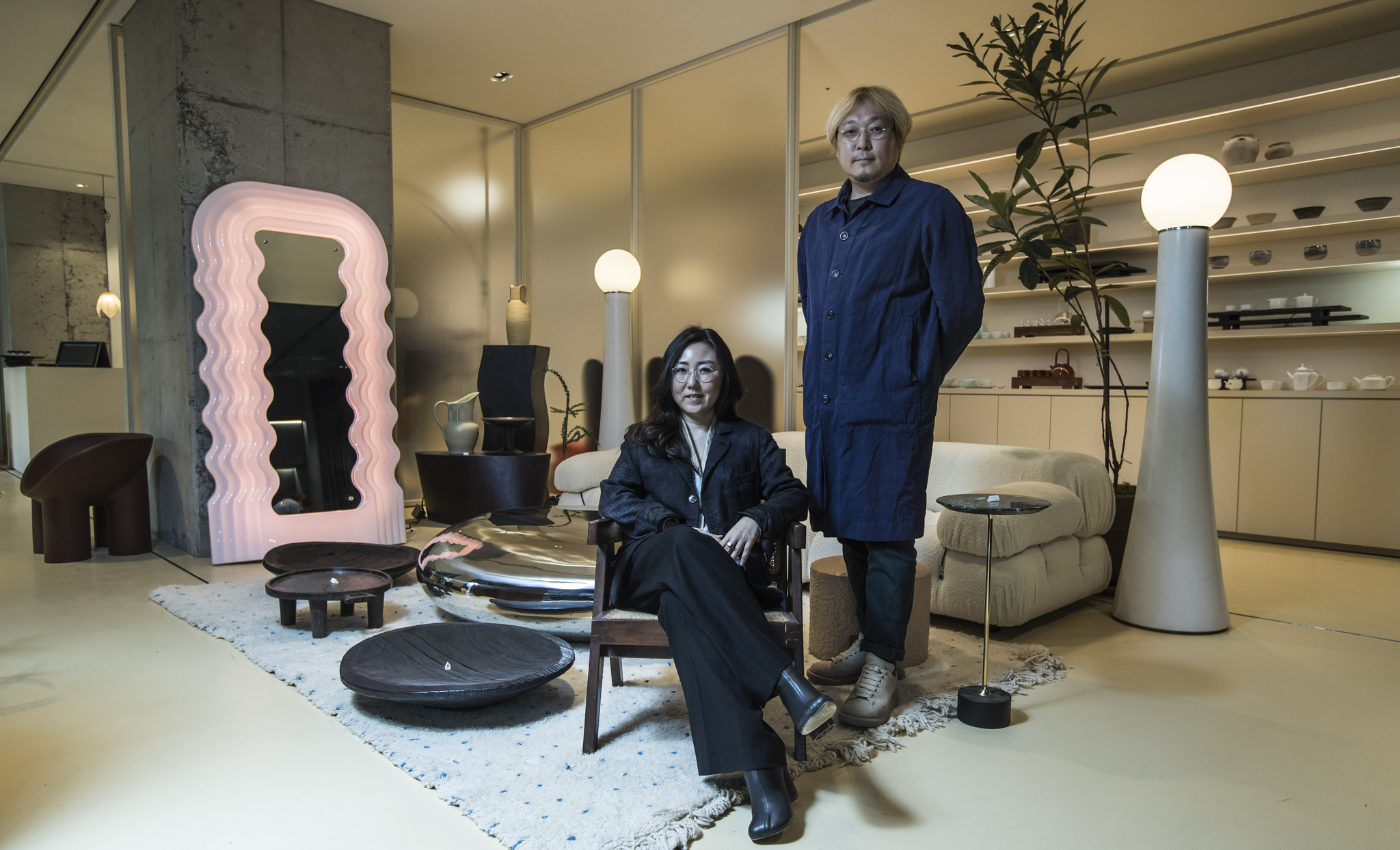 Kim Ga-on, left, and Koo Byung-jun, the CEOs of Chapter1, pose for a photo at the Hannam-dong branch of their select shop located in Yongsan District, central Seoul. [KIM SEONG-RYONG]

On a recent afternoon, the select shop Chapter1 located in the posh residential neighborhood in the central Seoul area of Hannam-dong, Yongsan District, was filled with people looking at the diverse array of items on display.

Across the spacious showroom, which opened in March, clothing, jewelry, furniture, lighting fixtures and unique handcrafts are loosely but strategically scattered about.

The first branch of Chapter1 opened in 2013 in Sinsa-dong, Gangnam District, southern Seoul.

Due to the nature of select shops, which sell a limited number of brands and products, the success of the business is highly dependant on the merchandisers who pick out the products and decide how to display them.

Of the many lifestyle select shops scattered around Seoul, Chapter1 is perhaps best known for its unique lineup of products.

When Chapter1 opened seven years ago, the local home décor market was dominated by interior goods inspired by Northern Europe. But Chapter1 didn’t follow the mainstream. Instead, the shop filled its space with dolls made by an obscure artist living in Brooklyn or a marble tray produced by a local factory and dinnerware created by a local artist.

The shop’s diverse offerings went viral, and Chapter1 has become a must-visit place for those who want to know the latest lifestyle trends in Seoul.

Chapter1’s second shop is nestled in an unlikely space — the garage of a pricey house located in the neighborhood.

The garage with high ceilings is decked with exotic products, including furniture from Brazil, odds and ends from a number of African countries and small handmade furniture  pieces made by local designers. The products were not easily available at any local select shops until Chapter1 Collect opened its doors. 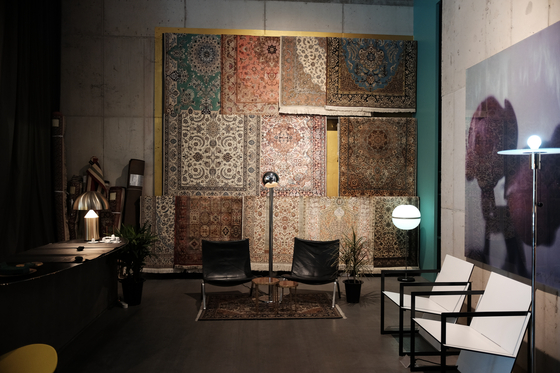 A wall at Chapter1 Collect located in Seongbuk-dong in Seongbuk District, central Seoul, is adorned with Persian rugs. [CHAPTER1]


If the previous two select shops were signaling the arrival of Chapter1 in the market, Chapter1 Edit, opened in 2018, was made to show off the true identity of the select shop.

Located in Jamwon-dong in Seocho District, southern Seoul, the shop was themed around Asia’s Shangri-la.

In accordance with its theme, the shop is adorned with plants with lush green leaves, viewing stones, stuffed animals, Buddhist statues and earthenware sourced from many countries across Asia.

Chapter1 Edit is also different from its two other branches as more than 90 percent of its space is filled with crafts made by domestic artists.
Instead of following trends, Chapter1 offers new things to consumers and found itself becoming a trendsetter.

Persian rugs and marble trays were in fad in recent years, largely thanks to Chapter1 which began selling those items earlier than others. The select shop also played a role in highlighting traditional crafts such as soban and yugi tableware. 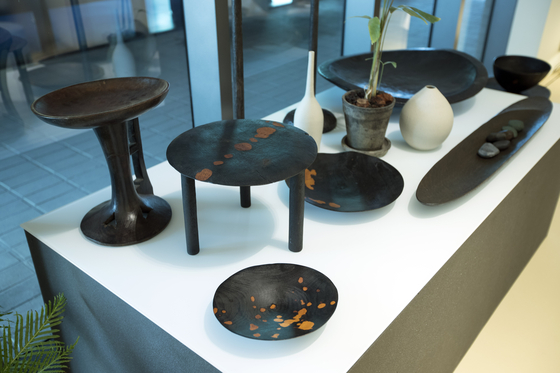 Inside the Hannam-dong branch of Chapter1 in central Seoul. [CHAPTER1]

Soban is a small tray-like wooden table and yugi is hand-forged tableware made with bronze.

The success of Chapter1 came from the philosophy of Kim Ga-on and Koo Byung-jun, who lead the select shop. They said they wanted to offer good things instead of selling trendy goods during a recent interview with JoongAng Ilbo, an affiliate of the Korea JoongAng Daily.

Kim used to work as a visual merchandiser at a fashion company for more than 10 years. Her main job was styling spaces to promote products. Her husband Koo majored in design at Design Academy Eindhoven in the Netherlands and previously organized exhibitions at local galleries.

The following are edited excerpts from a conversation with Kim and Koo.


There are a bunch of select shops around Seoul. What differentiates Chapter1 from its competitors?
Koo: A lot of select shops put a priority on brands [when sourcing products], but we didn’t resort to brands. Instead, we display goods that match well with our space and our concept. It was like drawing a whole different picture. The Hannam branch of Chapter1 has more than 200 brands, but we don’t attempt to explain each of them. Instead we make them stand out within our space. I guess this makes us different.

Do you have your own criteria when selecting products?
Koo: Anyone can choose good stuff. We wanted to bring underestimated, yet quality products and see them being rediscovered. I’ll tell you one anecdote. We went to Brooklyn before we launched Chapter1 and spotted this stuffed doll at a flea market. It was made by an African-American lady and she made the doll using drawings of her child. It was so cute, but she told us that she would stop making them because the doll was not selling well. I gave her my business card and bought all the dolls she had. The doll was selling well at Chapter1 and she began operating her factory again. We all know that a lot of shoddy products are priced way too high just because they are produced by certain brands. But some products created by individuals often do not find selling platforms just because they do not belong to brands. We wanted to introduce such products. 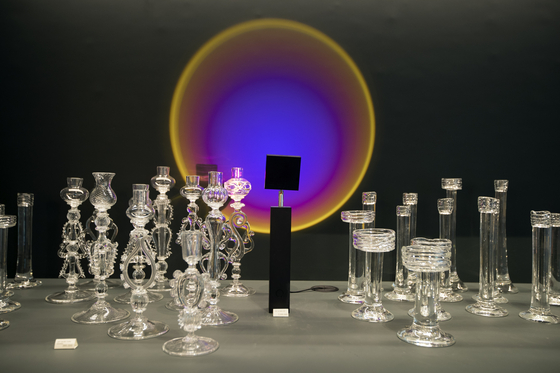 Inside the Hannam-dong branch of Chapter1 in central Seoul. [CHAPTER1]


You are also involved in making your own lines of products, right?
Koo: More than 50 percent of our products [are produced by us.] Let’s say we need 10 items to create a certain picture we have in mind, but eight of them are hard to find from markets. Then, we collaborate with local factories, designers and craftsmen to make those products. That plan was in our mind when we launched the very first shop, but it was hard to realize it back then. None of the select shops were producing the products they needed.

Over the years, you’ve discovered many local craftsmen. What was the thinking behind that?
Kim: We wanted to change the perception people have of Korean crafts, which are often thought of as lower  quality compared to products from Japan. We endeavored to nurture local artists, and those efforts have made Chapter1 special.

In the past, it was hard to find a select shop working together with local artists to create products.
Koo: It took us a whole year to open a single shop, and we had to have meetings with about 200 artists to prepare for the opening. You need at least two years of preparation before you have the final products. We repeated the tedious work procedures over and over again. But as time goes by, that procedure became a lot easier and the craft market has become bigger than before with more select shops creating their own products just like us. More than 90 percent of the products in Chapter1 Edit are from local artists while the Hannam branch has about 70 percent of its products made by local artists. 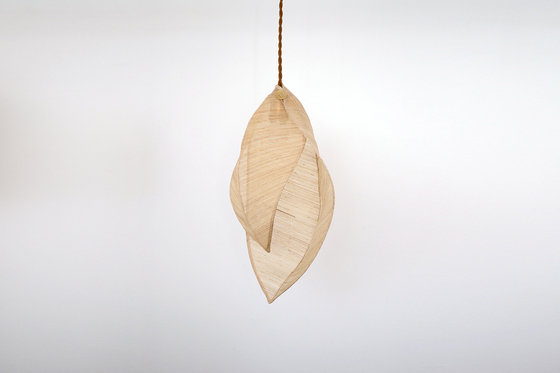 This light fixture is a collaboration between Chapter1 and artist Kim Min-su. [CHAPTER1]

Your offerings are always ahead of the times but they eventually lead the market. What is the secret to your success?
Kim: Trends come and go very fast in Korea. So we tried to avoid following trends and instead offer other options from a long-term point of view. Customers recognized the good-quality products first.

How would you define the identity of Chapter1?
Koo: I was embarrassed whenever I saw foreign guests who wanted to go to special places in Korea when I was working at a gallery. I wanted to take them to sophisticated shops or spaces that were uniquely Korean, but nothing came to my mind. I want Chapter1 to be a destination for non-Koreans who want to get a peek at the refined lifestyles of Koreans.

How can you explain Korean lifestyle trends?
Koo: It’s hard to define, but I would show them around our store so that they can see what we have. I was serving a group of foreign visitors at Chapter1 Edit the other day and they said they could feel the unique sentiments of Korea [at Chapter1].

Why buy a bed when you can simply subscribe?