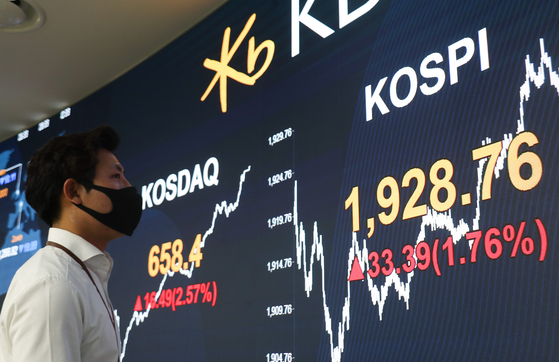 A man wearing a face mask looks at the Kospi index Wednesday displayed on a screen in the dealing room of Hana Bank located in Jung-district, central Seoul. Kospi gained 33.39 pointS or 1.76 percent to close at 1928.76. [YONHAP]

Stocks rose by more than 1 percent Wednesday as investors bet on the reopening of businesses around the globe after coronavirus lockdowns. The won rose sharply against the dollar.

The index stayed above the starting line throughout the session on the back of optimism over the gradual reopening of the global economy after countries started to ease coronavirus lockdowns, coupled with a rebound in oil prices.

"With countries continuing their efforts to develop coronavirus vaccines and drugs, the market responded positively as the reopening of the economy in each country could pick up pace and ease concerns of recession," said Seo Sang-young, an analyst at Kiwoom Securities.