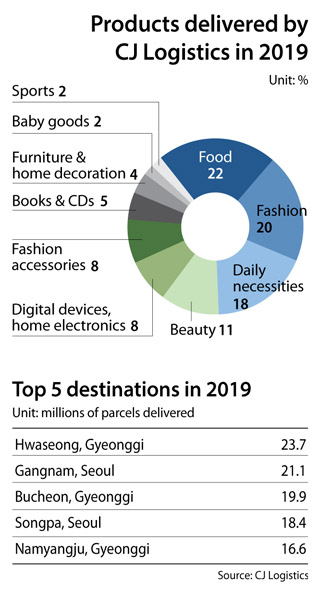 With data on the 2.5 billion parcels delivered, CJ Logistics knows what Korean consumers like. It knows what they eat, what they wear and what cosmetics they prefer.

After two years of collecting the information, the company made a few unsurprising revelations. Food was the most popular item.

It also stumbled upon some interesting data. Mala sauce deliveries were up sevenfold in 2019. Six of 10 fashion items were black, white or grey. CJ Logistics is electronically sent invoices by the vendors therefore was able to utilize the information.

In 2019 alone, CJ Logistics delivered 1.3 billion boxes to Korean doorsteps. If those parcels were lined up end to end, they would circle the globe 11.5 times.

Neoguri and Chapagetti, ramyeon products made famous in Oscar-winning “Parasite,” were 8 percent of all ramyeon deliveries in 2018. Last year, the figure jumped to 19 percent.

Deliveries of food products containing black sugar, which became popular with the Taiwan bubble tea craze, soared 186-fold in 2019. China’s mala sauce continued to be trendy in 2019, with orders up sevenfold on year.

In fashion, black was the most popular option. Thirty-eight percent of all clothes delivered by CJ last year were black. White and grey followed, at 15 and 9 percent respectively.

A notable change in the fashion segment last year was the increase of senior customers buying fashion and beauty items. Partial wig deliveries were up 87 percent on year.

By region, the area that received the most parcels from CJ Logistics was Hwaseong, Gyeonggi. Gangnam in southern Seoul was No. 2.

“Parcel delivery started deeply entering the lives of Koreans in the early 2000s with e-commerce and TV home shopping channels,” CJ Logistics said in a statement.