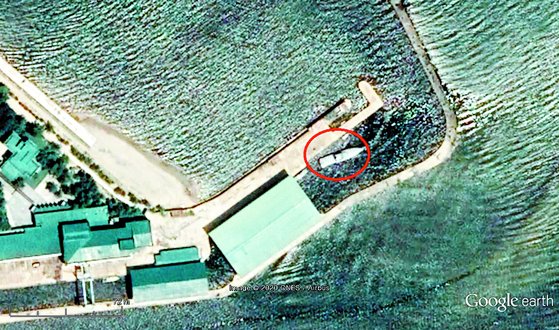 Yachts used by North Korean leader Kim Jong-un, who has vanished from state media for 17 days, were spotted off the coast of Wonsan in Kangwon Province, according to the latest satellite imagery.


NK Pro, affiliated with NK News website on Pyongyang analysis, revealed satellite imagery Tuesday that showed boats often used by Kim off the coast of Wonsan throughout April, suggesting Kim is in the eastern port city.

The boats were said to have made unusual moves around April 14, when Pyongyang launched multiple cruise missiles. This missile test was not reported in North Korean media, however.

NK Pro reported that evidence suggests a naval facility in Munchon, bordering Wonsan, was involved in the April 14 test and that those exercises may have taken place in the waters off the Wonsan-Kalma peninsula.

Kim has not made a public appearance since April 11, leading to much media speculation about his health and whereabouts.

NK Pro reported that Kim’s villa in Wonsan made use of one of the leader’s yachts in recent years while two others have moved from a dock in the city toward a nearby island.

When boats at the villa are moved to different locations, Kim is usually in the area.

Seoul government officials have indicated that Kim has been residing in his Wonsan villa.

Some observers have speculated that he may be staying there instead of Pyongyang as a coronavirus precaution.

Cho Chung-hui, a former North Korean quarantine official based in North Pyongan Province and an analyst with the Seoul-based NGO Good Farmers, told MBC radio Wednesday that he is “certain that there are coronavirus cases in North Korea.”

North Korea officially claims it has no Covid-19 cases.

Cho said, “The novel coronavirus was discussed as an important agenda item during the Workers' Party Political Bureau meeting, and in the 70 years of history, North Korea has never responded so sensitively to an infectious disease. Based on such an official response, this means there definitely are cases.”

Following the rapid spread of the virus in China, North Korea shut its borders around Jan. 20. Other indicators that North Korea may have coronavirus cases include the state media dealing with the matter in a serious manner and stringent quarantine measures in place including mask wearing, lockdowns and postponing of the school year.

Cho said that in North Korea, residents “cannot go out on the streets without masks” and that “Pyongyang and local health and medical institutes have been recruiting emergency personnel.”

He added that gatherings have been suspended, along with major events.

Cho claimed that according to unofficial documents, hotels and inns in cities around Pyongyang like Anju in South Pyongan Province and Sinuiju and Chongju in North Pyongan Province are empty and that overseas workers coming back from China and Russia, trade officials and foreigners are being quarantined.