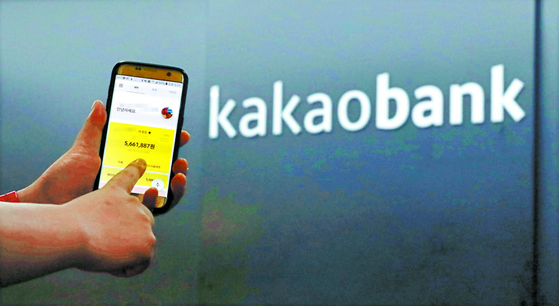 
Kakao Bank posted solid earnings in the first quarter ahead of its upcoming initial public offering.

The internet-only bank reported 18.5 billion won ($15 million) in net profit in the January-March period, which is a 181.3 percent year-on-year jump. The quarterly figure is higher than full-year net profit in 2019, which was 13.7 billion won.

“Due to expansion in loan assets, hence the interest margin, along with improvement in commission income, Kakao Bank was able to post a major jump in its net profit for the first quarter," the company said in a release.

Net interest income for the internet bank during the first quarter was 84.4 billion won, while commission income was a minus 3.1 billion won. Last year, it recorded 54.5 billion won and minus 14.8 billion won for the same categories.

Commission incomes was derived from partnerships with third-party financiers, according to the company, which is seeking to become a comprehensive financial platform.

Since last year, Kakao Bank has been partnering with brokerages to allow its customers easily establish trading accounts through the mobile app.

Collecting commissions by connecting its customers to secondary financiers also contributed in its boost in income.

Through Kakao Bank's service, customers who were denied loans by mainstream lenders could be introduced to other options offered by card or capital companies. Kakao Bank has partnered with a total of 11 financiers so far and is planning to expand the offerings.

Its commission income is expected to climb even further through its recently launched credit card business.

In April, Kakao Bank partnered with four major credit card companies — KB Kookmin, Shinhan, Samsung and Citibank — to better meet its user preferences. In less than two weeks since its launch, a total of 86,000 credit cards have been issued, according to the company.

“Kakao Bank's first quarter profitability was above expectation," said Kim Jin-gu, an analyst from KTB Securities. "But its external growth well fell below our estimate. The bank needs to expand its deposit volume in order to vie for sustainable growth in the future."

As of March, the amount of Kakao Bank’s deposit was 21.3 trillion won and loan was 16.7 trillion won.

Kakao Bank’s service launched in July 2017 three months after K bank, the country’s first internet-only bank. While K bank lost steam soon because of a lack of capital and has been effectively shut down since last year, Kakao Bank managed to pull off solid growth.

On the back of its growth, Kakao Bank CEO Yun Ho-young said last month that the company will start preparing for an IPO in the latter half of this year and hinted on a dream to go global in a distant future.