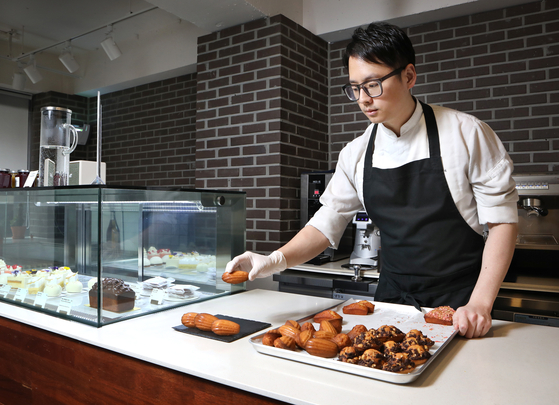 
Patisserie Cedrat in Gangnam District, southern Seoul, aims to be the ultimate spot to get French treats. The man behind Cedrat, Choi Kyu-sung, wants to introduce customers to classic and trendy French desserts that he learned to make during his time spent working for famed French pastry chef Pierre Hermé.

Classic desserts aren't limited to things that were popular centuries ago, like baba au rhum, but also includes the very basics that have changed over time. He offers madeleines glazed with olive oil and citron, as well as small tarts and cakes made using traditionally French techniques with different ingredients that are popular either in France or in Korea. 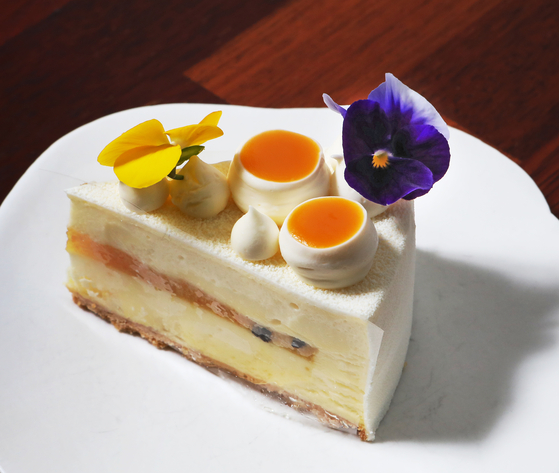 A small piece of cake offered at Cedrat. [PARK SANG-MOON] 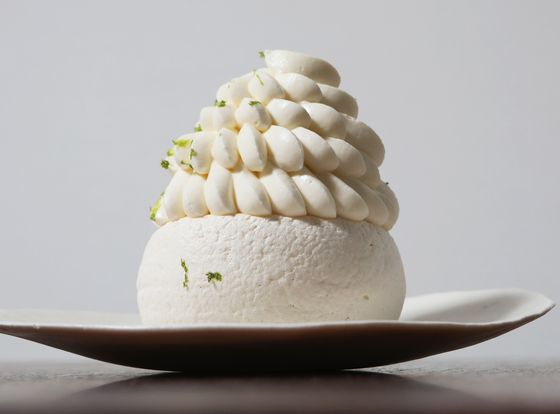 “I have seen how trends have changed in France from what’s more traditional to modern while I studied and worked there after I graduated high school in Korea. I wanted to introduce what French people eat and what they like in general,” Choi said. He left Korea in 2004 for France and came back for the opening of Café Dior inside the fashion brand's Seoul flagship, which was put together in collaboration with Pierre Hermé in 2015. 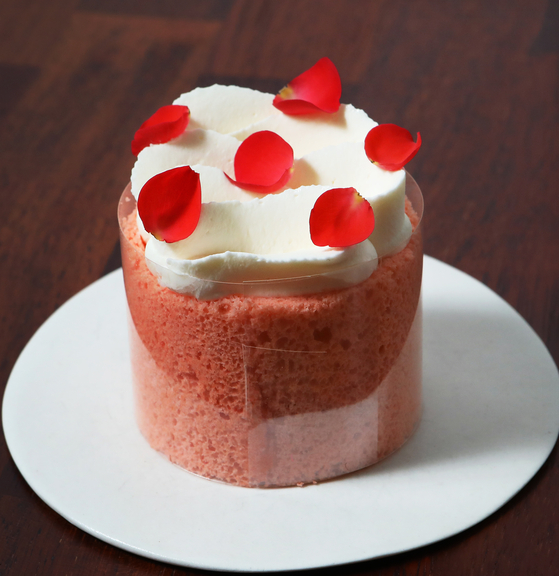 A small cake that can be purchased at Cedrat. [PARK SANG-MOON]

“After all, the end goal of my being in the industry is to make something that consumers are willing to try and see them happy about what they just ate.”

The chef has struggled with knowing how much of his knowledge and how many French pastries he can provide at any given time to a city largely unfamiliar with the intricacies of French desserts. He sticks to the techniques and flavors that please him while making items appealing to consumers. He has found that local consumers are not only moved by flavors but also by what their dessert looks like.

He finds that this desire for aesthetics comes from desserts being considered to be something in addition to basic needs. While food, clothing and shelter are undeniable essentials, eating dessert is something seen to be extra, like fashionable and expensive clothing.

“The culture of eating dessert is there for pleasure, not for survival, and the development of desserts relates to the financial status of a country,” he said, explaining that the market for pastry shops like his isn’t very large in Korea. Those who consider themselves avid dessert lovers would often head out to try new spots while searching for their favorites, but the general public doesn’t actively seek out certain styles of dessert, whether they are French, American or Korean.

He is still searching for ways to keep his kitchen as professional as he wants it to be while also being appealing to consumers. Just like many pastry chefs who also do dessert-making classes in addition to running their shop, Choi is considering ways to make his desserts more attractive. He has started using some more shaping tools to make special editions, like heart-shaped cakes for Valentine’s Day, because that's what many customers are looking for. His compromise is to keep all the flavors and textures he wants in the dessert with a little twist.

“I still am not really sure how to suit local tastes in general because the preference of each and every customer seems to vary so much and I feel I’m always on the verge of a road that has many different directions to choose from,” he said.

“I’m on a long journey, and I’ll see if I can continue to make things that make me and others happy, because sticking only to what I learned a decade ago is putting myself on a fast track to being very narrow-minded.”

Although he spends most of his time inside the kitchen trying to find new combinations of flavors and textures, he also spends time on YouTube to check out what others are doing out there. Choi considers this to be one way to help himself advance to the next level while still developing his own style.

“If you want to advance, you need to check on what others are doing,” Choi said. “You are going to be stuck inside your box and won’t know where you stand if you don’t care at all how people in the industry are doing.”

Although he has already left Pierre Hermé, the brand is something he still follows, as he thinks the brand has not lost its core values and style while successfully commercializing to produce items in large volumes.

“From technical sides to delivery, design and marketing, I have learned so much from the brand, and watching what they do provides me with some guidelines for myself,” said Choi.

Besides the pastry-related videos he watches online, other dessert chefs and masters from around the world provide Choi with inspiration. Chefs that serve savory foods and other styles of dessert such as mochi are a source of ideas for his flavor profile.

Choi recommends that visitors to Cedrat get something more than baked goods and small cakes. Patissiers usually do more than just baking, like getting their hands on making jams, chocolate and more. He may diversify even more if he gets an atelier of his own where he can explore more sweet options to offer.

New ancient bread offered by SPC is rolled out