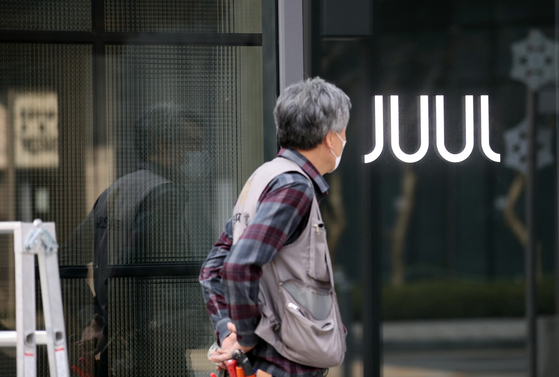 A man helps shut down a Juul Labs store in Gwangwhamun in central Seoul in March. The U.S.-based e-cigarette maker on Wednesday said it is halting operations in Korea. [YONHAP]


E-cigarette maker Juul Labs on Wednesday announced it will exit Korea, a year after it entered the market in May last year. A specific date on when it will halt operations has yet to be determined.


The decision was reached after Juul Labs began a restructuring process at the start of the year with the intention to cut down costs and diversify its product portfolio.

“Juul Labs introduced flavors it anticipated would meet the preference of Koreans,” said a spokesperson for the e-cigarette company in Korea. But sales did not reach expectations.

Juul Labs has been facing hurdles after local health authorities last year warned against the use of vaping products over health concerns. The authorities last year said they found vitamin E acetate, a potentially harmful substance, in liquid e-cigarette products distributed in Korea, some of which were made by Juul Labs.

The company said it tried to reset and reorganize the industry to sustain the business in the long term and earn the trust of society but admitted to the “highly challenging business environment” worldwide.

Juul Labs has been facing regulatory issues, with the authorities warning about the potential dangers of vaping. The Wall Street Journal reported on April 29 that Juul Labs is planning to cut around a third of its staff, or between 800 and 950 people, as part of a broader restructuring plan.