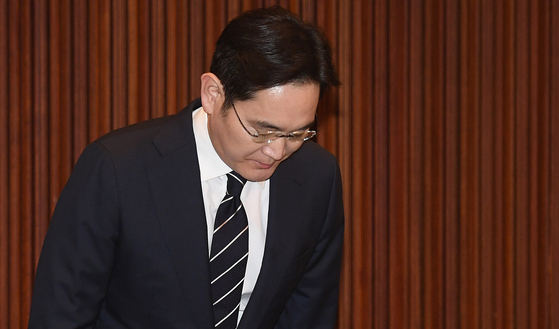 
Samsung’s de facto leader Lee Jae-yong vowed to end dynastic succession at Korea’s largest business group in a public mea culpa for irregularities in his own rise to the top.

“I won’t hand down [Samsung’s] managerial power to my children,” Lee said after offering an apology for causing controversy in the leadership transition process.

It was a rare pledge from the chief of a Korean chaebol, where family control is the norm and humility a rare commodity.

“Samsung has grown to become a top-tier company on the global stage,” Lee said, “But we sometimes failed to meet public expectations since [Samsung] didn’t strictly follow the law and ethical standards ... This is my fault. I apologize.”

Lee, who is vice chairman of Samsung Electronics, pledged to abide by the law in future succession procedures.

Samsung Electronics Chairman Lee Kun-hee has been hospitalized since 2014 after suffering a heart attack.


Lee's apology was his first since June 2015 when he apologized publicly for Samsung Medical Center’s poor handling of the Middle East respiratory syndrome, or MERS, outbreak.

A Samsung internal committee recommended that Lee apologize to the public as he is in the middle of multiple high profile trials, including a retrial of a bribery case involving former President Park Geun-hye.

Samsung set up the committee in February after a judge in that bribery case demanded in October that Samsung build an internal system to ensure that the group and its leaders follow laws, regulations and business rules.

The prosecution has accused Lee of bribing president Park in 2014 in exchange for regulatory decisions in favor of the merger between Samsung C&T and Cheil Industries, a deal considered to be key to strengthening Lee’s control over Samsung affiliates. He was found guilty of perjury, embezzlement, and bribery in an appeals trial in 2018 for one of the scandals that led to the removal of the former president but the Supreme Court ordered a retrial last year.

Samsung executives are facing an appeals trial for destroying evidence to conceal alleged accounting fraud at Samsung BioLogics. The biopharmaceutical unit was accused of manipulating financial reports of its subsidiary Samsung Bioepis ahead of a planned initial public offering to inflate the corporate value.

Lee is expected to be summoned to testify whether he ordered the destruction of the evidence. The executives were sentenced to two years in jail.

The heir apparent also addressed an allegation that Samsung fought the formation of labor unions across affiliates, promising to end the practice.

“I will make sure that Samsung is not criticized for 'union-free management,'” he said, “Samsung will value and fully embrace employees' rights to [form and join trade unions, to bargain collectively and to engage in peaceful assembly].”

The internal committee initially asked Lee to make his apology by April 10. Samsung had requested more time, citing difficulties in relation to the coronavirus pandemic.