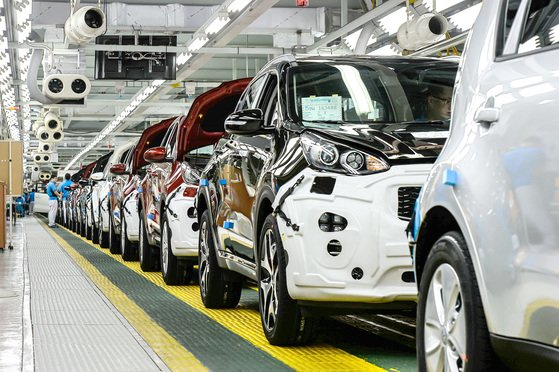 One of Kia Motors' factories in Gwangju that manufactures vehicles, including Sportage, Pride and Soul, all of which have found popularity overseas. [KIA MOTORS]

Kia on Friday announced it would once again halt operations at its factory in Gwangju from May 25 through May 29, citing a potential backlog of vehicles amid a dramatic drop in overseas sales.
The automaker previously suspended production at the factory on April 27 before reopening it on May 11.

“The company agreed with the labor union to temporarily close the factory in Gwangju since continuing the manufacturing [when demand is low] could pile up stocks,” a spokesperson for Kia Motors said.

The Pride, Soul boxcar and Sportage are among the vehicles manufactured at the factory. The Pride is currently only available overseas, including Europe, the United States, China and Saudi Arabia. Sales of the Soul are highly relied on in the U.S. market, while the Sportage has been popular both within and outside of Korea.

The factory manufactures around 900 vehicles per day. Kia operates three factories in Gwangju. Around 2,000 vehicles are manufactured each day in the southern city.

Last month, Kia Motors' domestic sales rose by about 20 percent to 50,361 units, but its overseas sales fell 54.9 percent to 83,855 units. Domestic sales were helped by the launch of the fourth-generation Sorento SUV last month. The company said the coronavirus was the reason for sluggish sales overseas.

The company said that its global sales fell as the coronavirus pandemic reduced demand for new cars and forced overseas factories to suspend operations.

“Although the number of shipments and wholesale auto sales dipped on automakers’ conservative production, one positive sign for the automaker industry is that retail sales in some regions stayed more solid than was expected,” said analyst Jung Yong-jin from Shinhan Investment, in a report released on May 8. “Following the second quarter, concerns over excessive stocks could be partially solved.”