Cho Kuk's wife gets bail after 199 days behind bars

Cho Kuk's wife gets bail after 199 days behind bars 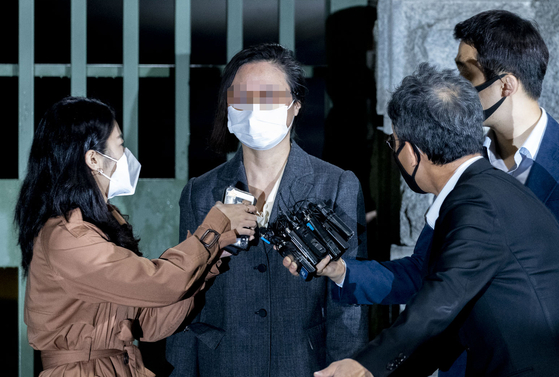 Chung Kyung-sim, second from left, the wife of former Justice Minister Cho Kuk, is questioned by reporters as she is released on bail Sunday morning. [YONHAP]

A reticent Chung emerged from the entrance of the Seoul Detention Center in Euiwang, Gyeonggi, wearing a face mask and gray jacket.

She took no questions from reporters about her upcoming trial, though she bowed in gratitude to supporters gathered to applaud her release.

The 58-year-old English professor was released after the Seoul Central District Court on Friday granted her bail on the grounds that she was “unlikely” to tamper with evidence.

Chung was taken into custody on Oct. 23 and indicted on Nov. 11 on 14 charges that followed a first charge filed in September. She was charged mainly with allegedly forging academic records for her children’s college and graduate school applications, making investments using insider information and ordering the destruction of evidence.


Cho, who served a brief month-long stint as justice minister from September to October last year, was indicted Dec. 31 on a dozen different charges including bribery, graft and violating the ethics code for public servants.


The accusations that the couple attempted to gain preferential academic treatment for their children using their clout sparked an intense partisan debate last year in a country with one of the most fiercely competitive education systems in the world.

Chung's supporters argue that the prosecution service mounted an unfair and exaggerated investigation into the Cho family as an attempt to sway public approval from the Moon administration and derail the president’s drive to reduce prosecutorial powers.

That ideological clash was manifested Sunday morning outside the penitentiary, when supporters and detractors alike gathered to applaud and protest Chung’s release. Police deployed around 90 officers to ensure order was maintained. Two people on each side were booked by police after they engaged in a physical scuffle.

Prosecutors, who were dealt a blow with the court’s decision to allow Chung bail in spite of their attempt to keep her behind bars by submitting a 240-page writ for her arrest, will be pressed to prove a need for Chung’s arrest once more at a scheduled hearing on May 14.

Prosecutors have so far been unable to obtain evidence proving Chung forged academic records for her children, such as the actual certificates in question or Chung’s laptop computer that they say may have been used to forge the documents.