Moon says this is Korea's moment to lead the world

Moon says this is Korea's moment to lead the world 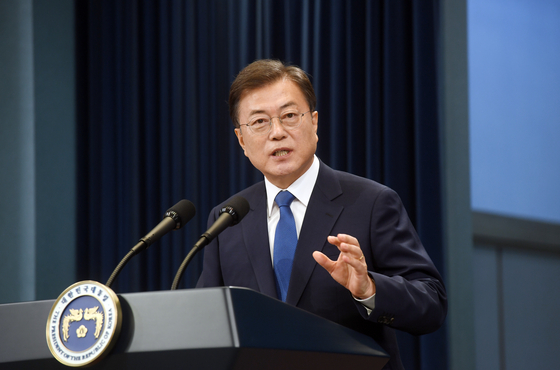 
President Moon Jae-in on Sunday pledged the Korean government would lay the foundation for universal unemployment insurance and transform the country into the world’s factory for high-tech industries in a series of bold promises for his final two years in office.

In a public address marking the third anniversary of his presidency delivered at the Blue House, Moon vowed to turn the global coronavirus crisis into opportunities for Korea to lead the world.

“If we fail to turn this crisis into an opportunity, we cannot survive,” Moon said, his somber tone underscoring the gravity of the situation. “It’s a desperate time — we must prepare for the future in a preemptive manner.”


Noting the immensity of the challenge posed to the world economy — which he likened to the Great Depression — Moon cast his government’s role as that of Franklin Delano Roosevelt’s administration in the United States in the wake of the global economic crash 90 years ago.


Pledging to roll out a “Korean version of the New Deal” to create jobs, Moon said he would overhaul the country’s unemployment insurance system to cover all those not yet insured, ranging from contract workers to freelancers and artists and eventually to all self-employed people.

The government will also work to implement an employment support program as soon as possible, which would include providing an unemployment allowance for jobseekers as well as job training and other support measures.

Moon’s audacious jobs creation pledge — which he called “an essential task to bolster” the dynamism of the Korean economy — represents the boldest step his administration has taken so far in fulfilling a promise during the 2017 presidential elections to find employment for millions of struggling youth.


The administration started the “Korean New Deal” project last month with the announcement that it was planning to give 1.5 million won ($1,200) to people who lost their jobs but aren’t covered by employment insurance.

According to Finance Minister Hong Nam-ki, around 10.1 trillion won will fund the allowances and create around 550,000 jobs, most in the public sector.

Much of these new new jobs are enmeshed with the government’s plan to expand the country’s digital infrastructure, Moon said in his speech Sunday.


Focus will be placed on fostering three new growth industries — “system semiconductors, biohealth and future cars” — as part of an agenda to transform Korea into a global leader in the digital economy, he added.


Amid the pandemic, “Korea has become the safest and most transparent production base in the world,” which Moon said presented “a golden opportunity” to attract high-tech investments from abroad and encourage Korean companies to relocate home. Cooperation with the private sector will be a major focus in this job creation drive, he added.

To finance these measures, Moon said the government was planning a third supplementary budget to complement the two stimulus packages already rolled out.

An overarching theme in the president’s speech Sunday was the notion of global leadership, which Moon stressed Korea had attained through its proactive and successful response to the virus outbreak.


To ensure Korea retains an upper hand in this “prolonged war” against the virus amid expectations of a second wave in the future, Moon said the government would redouble its efforts to prop up its epidemic prevention and quarantine system.

The measure, which many experts have long called for as a means to expedite official responses to outbreaks, would allow the KCDC to control its budget and personnel appointments independent of the Ministry of Health and Welfare. The strengthened agency will be staffed with more professionals and supported by expanded local epidemic response systems in the provinces, Moon said.

Stressing these steps were urgently needed to prepare the country for a second wave of the epidemic expected in the fall or winter, Moon said the government will also push to establish more hospitals specializing in the treatment of infectious diseases as well as a national infectious disease research center.

“The crisis is not over yet, and an even bigger challenge remains,” the president said. “We will become the nation that surmounts this crisis the fastest. We will become an example and a leader for the world.”