54 new infections traced to five night spots visited by over 1,500

More than 50 new Covid-19 cases have been traced to Itaewon in central Seoul, home to many foreigners, triggering fears of a second wave of the coronavirus in a country that had it well under control. 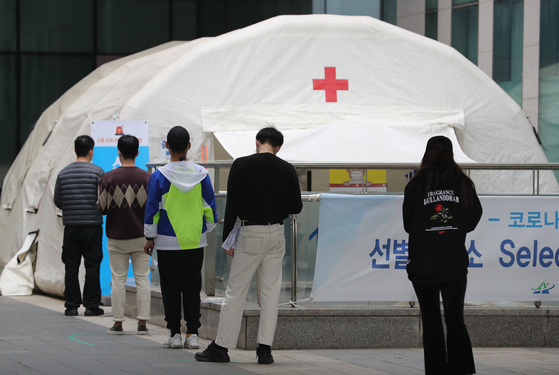 People line up at a coronavirus testing site at the Yongsan District Community Health Center in central Seoul Sunday. [NEWS1]

The cluster emerged last Wednesday when a 29-year-old Korean man from Yongin, Gyeonggi, tested positive for Covid-19 after visiting five different clubs and bars in Itaewon on the night of May 1 and early morning hours of May 2. Itaewon is a commercial district known for its vibrant nightlife, including a gay section, and is also home to many diplomats and other foreign residents of Seoul.

Officials from the Korea Centers for Disease Control and Prevention (KCDC) said that by Sunday noon, 54 coronavirus patients have been traced to Itaewon clubs and bars, including 43 people who visited those establishments and 11 of their friends, relatives and colleagues.

Among the 54 patients, 30 live in Seoul, 14 in the surrounding province of Gyeonggi, six in Incheon, two in North Chungcheong, one in Busan and another on Jeju Island.

Korea added 12 new cases Thursday, 18 cases Friday and 34 cases Saturday, almost all from the Itaewon cluster, according to the KCDC. The country's total case load now stands at 10,874. By Saturday midnight, 256 people had died and 9,610 people have been declared fully recovered.

Of the nation’s total 10,874 patients, 1,127, about 10.4 percent, contracted the disease while overseas, mostly in Europe or the United States. 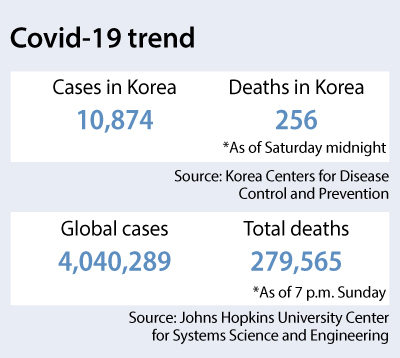 Health authorities said Sunday they expected more infections to be traced to the Itaewon cluster in the coming days as contact tracing continues.

More than 1,500 people are believed to have been at the five clubs and bars around the same time as the Yongin man, but Seoul officials said many weren’t picking up their phones, raising fears they were going into hiding. Seoul officials said the places kept lists of visitors — following government health guidelines — which included phone numbers. Some turned out to be fake.

Some of the places in Itaewon that the Yongin patient visited are known to be frequented by gay men, prompting a social media backlash against the local gay community, who often live in the shadows.

Health officials said Sunday that among the five clubs and bars in Itaewon that the Yongin man partied in from 11 p.m. to 4 a.m., most infections seemed to be coming from King Club, which he stayed in the longest. The other places he visited were Trunk, Queen, Soho and H.I.M.

Officials from the Yongsan District Office, which jurisdiction includes Itaewon, said Saturday that King Club has registered its business with the office as a “club,” where dancing is legally allowed, while the four others registered themselves as “bars,” where dancing is not allowed. In reality, however, it appears some of the bars allowed their customers to dance.

In an emergency press conference on Saturday, Seoul Mayor Park Won-soon banned operations of all businesses in the capital that are grouped in what’s called the “entertainment industry” in Korea, such as clubs, hostess bars, karaoke bars and other bars that allow drinking and dancing.

Park didn’t set a deadline for the ban Saturday, only saying that the businesses will be allowed to reopen once he says so.

Gyeonggi Gov. Lee Jae-myung followed Sunday, saying all entertainment industry businesses in the entire province must shut down for the next two weeks.

It was the second time the Seoul Metropolitan Government banned nightlife businesses during the coronavirus pandemic.

The first such ban was announced on April 8 and lasted till April 19 after a hostess in Gangnam District, southern Seoul, tested positive for Covid-19. At the time, fears rose that the infection could lead to a huge cluster, but it didn’t, and only her roommate got infected. The hostess was infected by a low-profile Korean singer who had arrived from a Japanese business trip.

It remains unclear whether the five Itaewon clubs and bars in question remained closed from April 8 to 19, but Na Baek-joo, director of public health care management at the Seoul Metropolitan Government, said King Club and Trunk reopened on May 2 after a period of closure, the same day the Yongin patient visited, while Soho reopened on April 24.

Health officials said they believe the man from Yongin appears to have been the initial spreader of the coronavirus at the Itaewon clubs, but how he got infected remains a mystery.

Nightlife in Korea, but make it safe for all skin colors