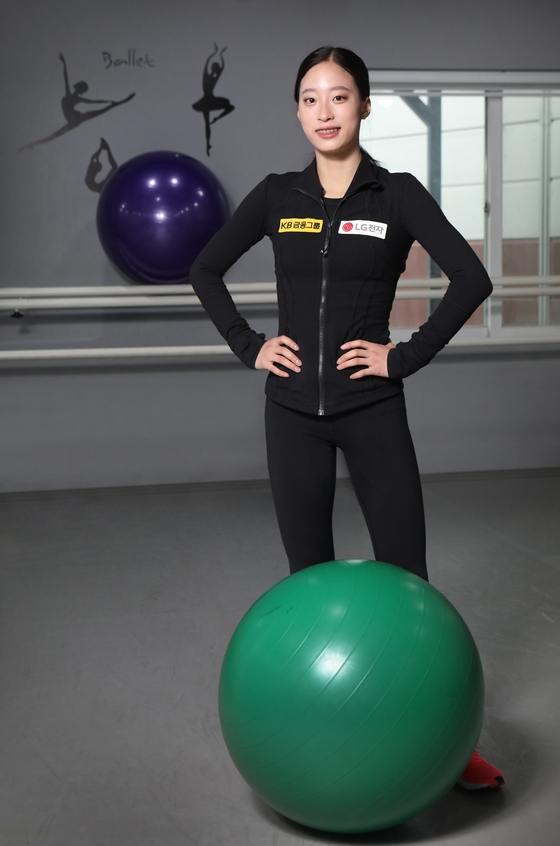 You Young poses for a photo at a training site after an interview with Korea JoongAng Daily at Namyangju, Gyeonggi, on April 20. [PARK SANG-MOON]

Over the next few weeks, the Korea JoongAng Daily will meet with athletes from across the sporting world to discuss how they got their start and earned their fame as well as their lives on and off the field.
This week’s interview is with figure skater You Young.

When You Young first stepped onto the stage of Korean figure skating, her victories began earning her the nickname of “the next Kim Yuna.”


However, it didn’t take long for You’s name to earn recognition of its own.

She may look like any other teenager off the rink, but when she stands at the middle of the ice to start her performances, her charisma is palpable and dominates the atmosphere.

“Mixed feelings,” You says when asked what she’s feeling in those moments when she’s striking her first pose before beginning her routine. “Like I’m nervous but I don’t really have any thoughts. But personally, I think it’s better not to think too much. It also helps me to feel comfortable, so I don’t think about anything. I think I just let everything go.”

Born on May 27, 2004, You, now 15, was born in Korea but moved to Singapore when she was only one year old. In her nine years living there she simply saw figure skating as a just a hobby. Despite it being just a pastime for the young You, she loved the sport so much that she used to figure skate until 10 at night.

You says that figure skating has all the elements you could want in a sport.

“Every sports is attractive in its own way,” You says. “[But in figure skating,] there’s this artistic element of ballet and technical areas like the jumps and so much more. Also, as I work harder, I can see myself improving, so I think that joy and excitement really got me into figure skating.”

While it is well known that You’s main inspiration for starting figure skating came after watching Kim Yuna at the 2010 Vancouver Olympics, she adds that it was actually her mom who fell in love with Kim first. 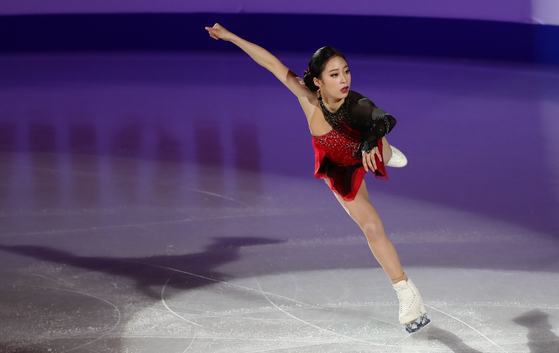 “Honestly, my mom really liked [Kim] Yuna,” You says. “She has watched clips of her since 2010, and she fell in love with her [for the sport]. But I also had this thought in my head that I wanted to figure skate when I watched the 2010 Vancouver Olympics. So I went to the ice rink, and it didn’t really work because it was so slippery. I kept on falling so I got annoyed and angry. But as I skated, I started to enjoy it, and that’s why I kept on skating.”

While You may have just been enjoying her time on the ice, her coaches saw her potential and suggested that she move back to Korea to seriously start her career. Upon this recommendation, she and her mother packed their stuff and moved back, and they haven’t looked back since.

It didn’t take much time for You to prove herself as a prodigy. While a lot of the young female figure skaters in the country did their best to follow in the skates of the Olympic legend and Korea’s sweetheart, Kim Yuna, no one could live up to the expectations she had set.

But that changed when You burst onto the scene where she has been dominating the rink ever since.

When You arrived in Korea, she started training at the Gwacheon Ice Skating Rink, where her hero Kim trained when she was little. Although she had a difficult time with Korean, she was more passionate than anyone else when it came to figure skating. After spending the majority of her time training, You, within a year, mastered the triple jump, and in 2015, she became the youngest athlete to be chosen for the national team, at age 10.

Since then, she’s been dominating Korea’s national championship and successfully defending her title every year except 2017.

Thanks to not only her raw talent but also the growing popularity of figure skating in the nation, You’s name has become synonymous with the sport. When she goes outside, she says that people recognize her but that there is a downside to this newfound fame as she is sometimes on the receiving end of malicious comments. However, the young star has figured out how to deal with this issue.

As well as dominating the Korean figure skating stage, You has also been making waves internationally. Competing in the International Skating Union (ISU) Junior Grand Prix (JGP) series starting from the 2017-18 season, she’s been continuously taking steps to improve her skating.
In only her second year of competing in the Junior Grand Prix series, she picked up her first medal, winning a bronze at the JGP Slovakia. She then went on to pick up gold at the 2019 Bavarian Open in February.

Following the 2018-19 season, You started competing in the senior ISU events. She took the new age division in her stride and continued to smash records.

Although I am honored to be called ‘the second Kim Yuna,’ I want to be remembered by my own name.'

You made her senior Grand Prix debut at the 2019 Skate Canada International and skated well enough to finish third. Even more impressive than the third place was the record she set by becoming the first Korean to ever successfully land a triple axel.

This time, it wasn’t a “first since Kim Yuna” record. Two weeks after You won the national championships, she competed at the 2020 Winter Youth Olympics in Lausanne, Switzerland, where she picked up a gold. The accomplishment allowed You to become the first-ever Korean figure skater to win a gold medal at the Winter Youth Olympics.

Without taking any break, You once again returned to Korea to compete at the 2020 Four Continents Championships that same month. Although she finished in just third in her short program, a strong free skate performance led You to move up a spot to pick up a silver medal. Once again, she became the first Korean figure skater since Kim to medal at the ISU Four Continents Championships.

Not only because of the new record, the 2020 Four Continents was a memorable tournament for You as she achieved her personal best ISU scores in combined total and in free skate. Her new combined total score is 223.23 while her free skate is 149.68 points.

Perhaps this may be why You says that the competition was the best moment in her career so far.

“I think the best moment was the ISU Four Continents,” You says. “At the time, [my score] dropped for the short program, but I regained my confidence and finished well. The moment I stood on the ice rink for the last pose, I got emotional. It felt like all the hardship I had mentally and physically was being washed away.”

Among the records she set, You says the one that means the most to her is being the first Korean to land a triple axel.

“I think that has a bigger meaning,” You says. “Because I was the first [Korean] to succeed in landing it.”

Despite all her accomplishments, like other athletes You has had her fair share of moments where she’s wanted to quit. However, she says that it’s the improvement that she sees at tournaments that motivates her to keep going.

“Well, it changes all the time,” You says. “When it’s been hard, there were a number of times when I just wanted to give up and I thought to myself, “Why I did start this?” But when I see good results at competitions, all those thoughts just disappear.”

While many people still call her “the next Kim Yuna,” what You really wants to be remembered for is her own name.  Although it was an honor to be given such nickname, You said that it also came with a lot of expectations.

“Because Yuna is an amazing person and she has achieved a lot,” You says. “And since I hadn’t achieved anything, it was quite overwhelming. But we are two different people so even if I’m not ‘the second Kim Yuna,’ I want to be remembered by my own name. Although I am honored to be called ‘the second Kim Yuna.’”

Although You has a certain persona when she’s on the ice, once she gets off the rink, she’s just like any other teenager. She loves to dance, listen to music and hang out with friends.

She says that she is also a big BTS fan and calls herself part of the ARMY (the collective name of fans of the K-pop boy band.) You says that she once got an outpouring of cruel comments after she revealed that she was a big fan of V from BTS.

“At first, I was getting direct messages from not just person but from many,” You says. “So, I felt a bit shocked.”

That may have been too much for her to handle. Ever since she overcame that, she says that she’s found her way to get through it.

“Since then, I’ve just gotten used to it,” You says. “At first, I was stressed about the comments, but as the time went by, it’s gotten better. So I’m O.K.”

Just like any other athlete, diet is something that she stresses about.

“Because we can’t eat when we want to, and I think that is the most painful part,” You said. “Just like normal people, I want to order late-night snacks. But I have to eat a diet bento box, so that’s really sad. But to maintain my body, I have to do it.”

You says that the one food that she craves the most is fried chicken.

Like almost every sport around the globe, figure skating was hit by the coronavirus outbreak. For You, it meant she had to end her season earlier than expected as the 2020 World Figure Skating Championships was canceled.

When she returned, You underwent two weeks of self-isolation, but now that she’s completed her quarantine she’s back at the training center. Although she’s not on the rink, she’s sweating on the floor for the upcoming season.

She does have concerns about injuries, especially when she jumps, but she tries not to think about them too much.

“I always have concerns,” she said. “Because I don’t know when I’ll get injured, and once I get injured, I feel like it will be tough for my body to recover. I have a lot of concerns in my mind, but if I think about it too much, I can’t do anything.”

That said, You is just focusing on mastering her choreography and skills. In terms of memorizing her choreography, she says that it takes about a week, and during that time she keeps on filming herself and watching it repeatedly.

“On the ice, I practice them until my body memorizes everything,” You said.

“With a good personality, and I want people to know me and that I’m one of them and that I want to touch their hearts with figure skating.”