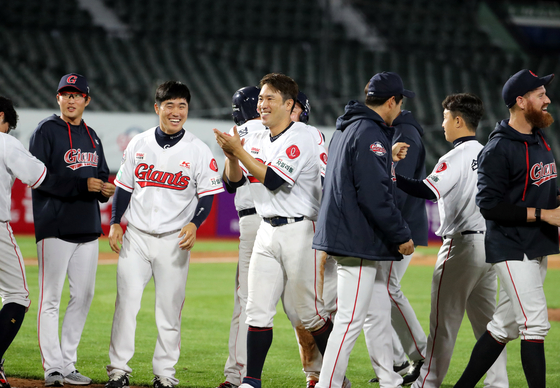 The Lotte Giants celebrate after picking up a win against the SK Wyverns at Sajik Baseball Stadium in Busan on Friday. [YONHAP]

Despite playing without any fans present, the Lotte Giants are off to a strong start of the 2020 KBO’s regular season.

After finishing dead last in the 2019 season, the Giants underwent a huge transformation. From general manager to a manager to some of the players, there were uncertainties about whether the club was heading in the right direction, taking into consideration the plethora of changes made in the off-season.

But, although it’s only been a week since the season started, all the decisions made by general manager Sung Min-kyu are proving to be the right ones so far. In the KBO’s first week, they’ve won all their games, a five-game winning streak. It marks the first time in seven years, since 2013, that the Giants have won five straight games since the first game of the season. 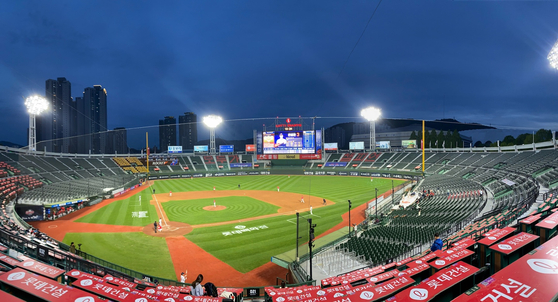 A photo of an empty Sajik Baseball Stadium in Busan on Saturday. [KANG YOO-RIM]


Five wins is also good enough to put the Giants at the top of the leader board, only 0.5 games ahead of the Kiwoom Heroes who picked up five wins and a loss over the first week. The Giants only played in five games as their Saturday game against the SK Wyverns was canceled due to rain.

Followed by the Giants and the Heroes, the Dinos are ranked third with four wins and a loss, while the Bears are ranked fourth with three wins and two losses.

In the first week, the Twins are ranked fifth while the Kia Tigers, Samsung Lions and the Hanwha Eagles are tied for sixth. The KT Wiz, who normally starts the season strong started off poorly. They’ve only picked up one win while losing four. Due to this, they are tied for ninth with the Wyverns.

Behind the Giants’ success, their foreign infielder Dixon Machado played a significant role. When Sung first scouted Machado, he was evaluated to be a defensive player. However, since the season started, he’s proving that he can also be strong in the batting lineup as he hit three home runs and eight RBIs with a 0.389 batting average throughout five games.

On the mound, starting pitcher Dan Straily has been leading the Giants. He’s started in two games for the Giants, and during a game against the Wyverns on Sunday, Straily picked up his first win of the season. He tossed seven scoreless innings, while striking out 11 and giving up only three hits.

Even in the team’s number of home runs, the Giants are tied at the top with the Dinos at nine. In terms of team batting average, the Giants are ranked third at 0.295, as of Sunday’s game.

Starting Tuesday, the Giants are expected to play a three-game series against the defending champion, the Bears, at Sajik Baseball Stadium in Busan.

Then after the three games against the Bears, the Giants will hit the road to play their weekend series against the Eagles in Daejeon.

Followed by the Giants, the Heroes are also off to a strong start by picking up five wins and a loss. Their only loss was against the Tigers on Thursday, but throughout their weekend series against the Eagles, they’ve picked up come-from-behind victories for a sweep.

An interesting fact about both the Giants and the Heroes is that both clubs have new managers this season. There were concerns that appointing new managers would mean it would take time for the players to adjust to new coaching styles and personalities, but that hasn’t seemed to be the case for either of the clubs.

Starting tomorrow, the Heroes will continue their season at Gocheok Sky Dome in western Seoul and play a three-game series against the Lions. Then, they’ll head over to Jamsil Baseball Stadium in southern Seoul to play the weekend series against the Twins.