Eric Teo and his wife, Kim Min-jae, pose for a photo with South Korean President Moon Jae-in at the Blue House on Aug. 21. [Singapore Embassy]


When Kim Jong-un visited Singapore for a summit with U.S. President Donald Trump in 2018, he did not immediately retire to his hotel room at the conclusion of the day’s events.


Instead, he went sightseeing.

His itinerary was one that would make even the best traveled tourists hesitate.

On the night of June 11th, after completing his day’s schedule by 9 p.m., Kim whipped through three major tourist destinations in a span of just three hours.

And in these hours, in the calm before the storm of the summit talks, one man was entrusted with making sure everything went smoothly for the North Korean leader.

“Throughout the three days of the summit, I had the opportunity to observe the chairman,” said Teo in an interview with the JoongAng Ilbo, “He was especially interested in Singapore’s tourist industry and wanted to learn a lot about it.”

After Kim observed one of Singapore’s major tourist destinations and nature parks, the Gardens by the Bay, he promised Teo he would donate pine trees from North Korea to the park.

“Kim was only 34 years old at the time of the summit,” said Teo, “but his self-assured way of speaking left a deep impression on me.” 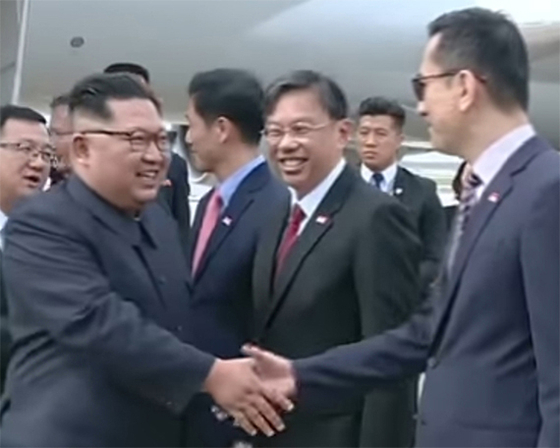 
For weeks until he finally surfaced on May 1, Kim was the subject of intense speculation over his health.

But according to Teo, at least in 2018, Kim did not show any signs of physical problems and seemed to be in excellent health.

“Everything was normal [then],” Teo recalled. “There were no issues.”

Of course, it was no coincidence that Teo was posted at Kim’s side for such a monumental summit.

Even before he became ambassador to South Korea, Teo was used to shaking hands and rubbing shoulders with leaders of the world.

After graduating from the National University of Singapore, he obtained a master’s degree in international public policy from Johns Hopkins. Thereafter, he worked at the Singaporean Embassy in Tokyo, the Singapore Trade Office in Taipei and the Singapore Embassy in Beijing.

While serving in various diplomatic capacities for Singapore, Teo met his wife, who is Korean, in 2006, while she was teaching Korean at the National University of Singapore.

“I never knew that I would be coming to Korea as an ambassador when I met my wife for the first time in 2006,” Teo recalled.

Teo complimented South Korea on its measures to combat the coronavirus, emphasizing that, in the future, Singapore and South Korea should work together to solve a diverse array of issues — not just those pertaining to Covid-19.

In the early stages of the coronavirus outbreak, the Singaporean government quickly restricted air travel into the country. Coupling that with efficient lockdowns and an exceptional health care system, Singapore was able to get a handle on its first spike in infections. In fact, Singapore was hailed as a model country that seemed to know exactly what it was doing.

But in mid-March, a second spike hit the country, which was attributed to one area the government seriously overlooked.

The cramped dormitories of migrant workers.

In Singapore, the population comprises 3.5 million citizens and 2.2 million foreign residents, 300 thousand of which are foreign migrant workers, most of whom live in worker’s dormitories.

In such dormitories, up to 12 people may be found living in a single room.

When a few confirmed cases arose from those areas, the Singaporean government launched an aggressive testing initiative targeting those communities.

“The number of confirmed cases spiked as soon as we started to test aggressively,” said Teo. He emphasized the importance of actively targeting communities that are most at risk, just as the Korean government did with Daegu and the Shincheonji church.

Singapore has tested roughly 20 percent of its population.

Yet Singapore’s fatality rate due to the virus hovers at just 0.1 percent compared to Korea’s 2.3 percent.

Teo attributes Singapore’s low fatality rate to two reasons. The first is its advanced medical facilities. The second is an effective distribution of those resources.

“We made sure to quickly distinguish milder cases of the virus from the more severe,” said Teo. “These measures allowed us to avoid a shortage of medical facilities.”


Teo also criticized foreign news reports that attributed the spikes to the slow response of the educational institutes — that failing to delay the academic semester had aggravated the outbreak.

“Unlike the Korean academic semester, schools in Singapore start their semester in January,” said Teo, “There were almost no confirmed cases of students getting infected.”

Nonetheless, schools in Singapore, as part of the social distancing campaign, will continue to rely on online classes until the beginning of June.