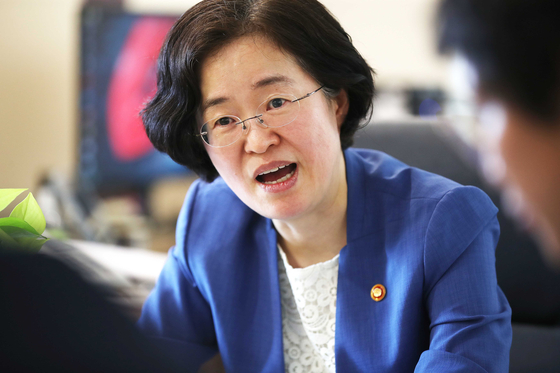 
Samsung Electronics Vice Chairman Lee Jae-yong made headlines last week with a public apology and a vow to end his family’s dynastic control of the company, eliciting praise from some observers while others viewed the business leader’s words with skepticism.

Fair Trade Commission (FTC) Chairwoman Joh Sung-wook viewed the apology in an optimistic light, commending it as an effort to create a rational corporate governance structure.


The FTC has long taken an active role in reining in Korea’s chaebol, the family-run conglomerates in which a small portion of the stakeholders often wield a disproportionate amount of power over the companies through complex cross-shareholding arrangements.


And as the economic crisis deepens in the wake of the pandemic, many companies are facing unprecedented challenges, as evidenced by a proposed merger between two struggling airlines. Joh said the commission will conduct corporate merger reviews as soon as possible to reduce uncertainty. 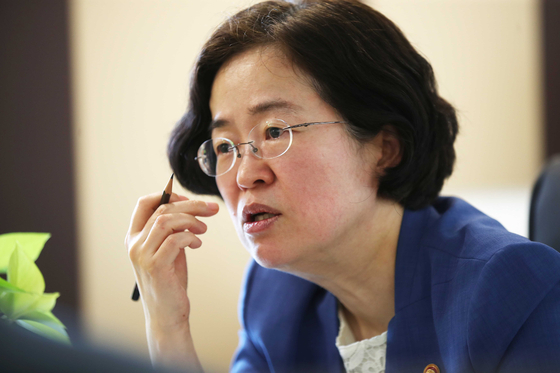 
The JoongAng Ilbo sat down with Joh on Friday to listen to her assessment of Lee’s Wednesday apology. Over the course of a 90-minute interview, Joh’s most frequently used expressions were fairness (32 times), competition (15 times), corporate value (12 times) and consumers (12 times). She repeatedly sought to cast the FTC not as an organization that imposes sanctions on companies, but as a "referee" that manages the rules of the game. The following are excerpts from the interview. 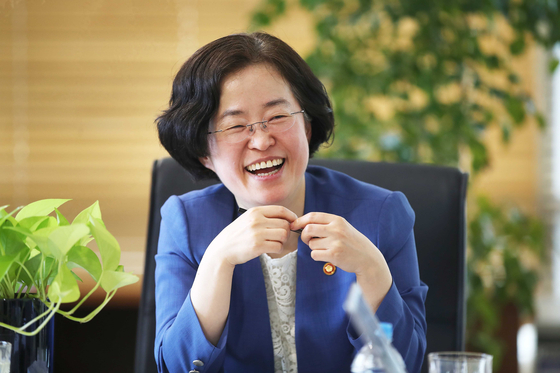 Q: How do you evaluate Lee's apology?

A: A positive change to the corporate governance structure will enhance corporate value. This will not only be helpful to Samsung but also to the Korean economy as a whole. I hope it will serve as an opportunity to strengthen our national competitiveness. What’s important is practice. Once the actions materialize, it will also gain market confidence.

The chaebol definitely play an important role in the economy. While keeping the current policy, the FTC intends to improve corporate governance structure through market pressure and reduced cross-shareholdings.

What is a good corporate governance structure?

It is when the responsibility and authority are consistent and a transparent decision-making process is provided to shareholders. A holding company structure is recommended in that regard. It can be cited as an achievement that the number of cross-shareholding links has decreased significantly under the current administration from 282 to 13.

Delivery app Baedal Minjok (more commonly known as Baemin) continues to be a controversial issue, after Baemin applied to the FTC for approval of a corporate merger with Delivery Hero, the company that runs Yogiyo. Do you have anything to say about this issue?

The FTC will focus on whether the recent attempt to change the fee was a monopoly power abuse, rather than [examining] whether the commission fees were high or low. It will not only look into the market share but also look at its monopoly rights over information distribution related to the production, collection and use of information of the restaurants and customers.

What do you think about innovation?

Innovation is not simply an opportunity for companies to generate profits, but a chance for consumers to enjoy new products and services. For innovation to succeed, a fair economy is important. Too much government intervention may undermine innovation, so the FTC will intervene at an appropriate level. In the case of the "Tada Prohibition Act," I respect the opinion of the legislative branch, but I think Tada was a good innovation. Even small innovations can lead to big changes.

Corporate conditions are rough right now, due to the impact of the Covid-19 pandemic. Is there a chance to reduce the scale of the FTC investigation?

There will be no reduction. As the economic situation became more difficult, there could be more cases of unfair subcontracting or infringement on consumer interests. We are avoiding on-site inspections, but issues could worsen for those who reported unfair transactions, so we conduct on-site investigations for such cases that require prompt investigation. We also extended the deadline for submitting investigation data, and the reviews of mergers will be decided as soon as possible. As a result of employees working overnight, corporate merger reviews, including Asiana Airlines and Eastar Jet, ended in six weeks, while it usually takes about 90-120 days.

Why do you think companies that relied on large volumes of international trade put a strain on the economy?

Companies learned the business risks of being highly dependent on the global economy amid the new coronavirus outbreak and restrictions on exports to Japan. As the coronavirus crisis may last longer, it will be better for the companies that went abroad to return to Korea, where there’s a good quarantine infrastructure and they can share their workload with small- and medium-sized enterprises.