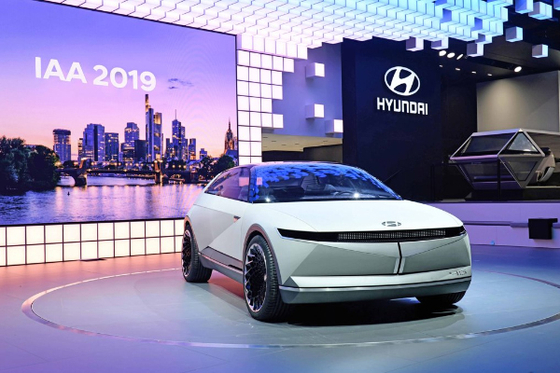 Hyundai Motor's concept car, 45, is showcased during the Frankfurt Motor Show last year. The automaker is preparing to launch a new line of electric vehicles as early as January with an exclusive platform. [HYUNDAI MOTOR]

Korea's largest automaker confirmed Monday that it recently told its labor union about the plan, which it calls its “NE” project, during a meeting held at the company’s main factory in Ulsan. The company hopes to launch the vehicle as early as January 2021.

Hyundai Motor is planning to shift two assembly lines at the factory to become exclusive to electric car manufacturing. The lines will use the Electric-Global Modular Platform, or E-GMP, the company’s self-developed EV car body platform that it started developing last year.

The new EVs are expected to be designed based on the concept car dubbed 45 that Hyundai Motor showcased during the Frankfurt Motor Show in September.

At the moment, all EVs from Hyundai Motor, including its high-selling Kona SUV and Ioniq compact liftback, are made by running gasoline model assembly lines then replacing engines and related parts with electric motors.

With the launch of NE, Hyundai Motor believes its new electric cars will have more interior space and improved performance, as EVs don’t require much space for engines like traditional fossil fuel vehicles.Hyundai Motor’s current electric cars have less space in the backseats, due to the space required to store the batteries.

Hyundai Motor said it is still working to finalize the design and other features for the forthcoming EVs.

But that plan isn’t expected to be well-received among unionized workers, who fear employment cuts from Hyundai Motor shifting to EV production. Electric cars require fewer parts than traditional fossil fuel vehicles in manufacturing, which could result in job cuts.

The automaker’s union has been working with management since last year to negotiate expected reductions in positions, electing a moderate leader who is known to favor practical solutions over protests.

An advisory committee in October recommended that Hyundai Motor cut its workforce by up to 40 percent, or 10,000 workers, by 2025 to keep its head above water.

And as Hyundai Motor focuses more on EV production and shifts away from fossil fuel vehicle production, those job losses are likely to accelerate. Last year, Hyundai Motor Group sold 24 electric models around the world. In the next five years, the group will expand the lineup to include 13 gasoline hybrids, six plug-in hybrids, 23 all-electric and two hydrogen fuel-cell electric cars.

“Electric cars require fewer parts to be manufactured, and we are not trying to deny that,” Hyundai Motor spokesperson Kim Tae-sik said. “But that doesn’t immediately equate to any job cuts. A plan is a plan, and we are going to be working with the union on future projects.”