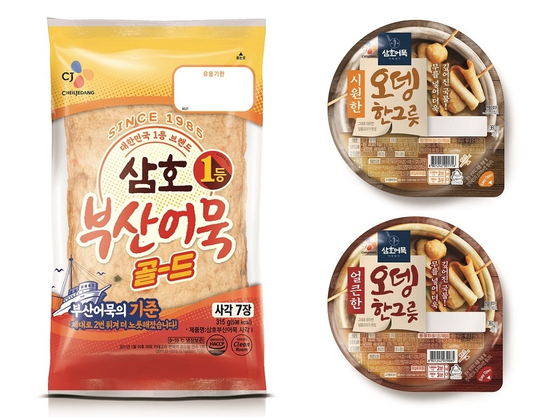 
CJ CheilJedang has upgraded its fish cake products in response to recent demand growth as more people continue to dine at home.

The food manufacturer said it improved the quality of two types of Samho fish cakes. The upgraded fish cake has been fried twice to make the exterior look more yellow while the company added radish in the fish cake soup to improve the taste.

Fish cakes, also called eomuk in Korean, is a popular street food, especially in the winter months. It is commonly made of salted fish, like cod or Pollock.

The fish cake market surpassed 280 billion won ($249 million) in 2015. But the growth lost momentum over the past several years due to the popularity of home meal replacement products, according to CJ CheilJedang.

But demand has regained momentum recently, with sales reaching 36.3 billion won in March, up 30.8 percent on year. According to CJ CheilJedang, the March sales are surprising, as fish cakes are typically more popular in winter. Sales usually start to drop in March.

“Demand for fish cakes has seen a rise following the trend in dining at home, as fish cakes are seen as an ingredient for having a proper and healthy meal,” a spokesperson for CJ CheilJedang said in a statement.