'Extracurricular' star wants his teen drama to impact adults, too 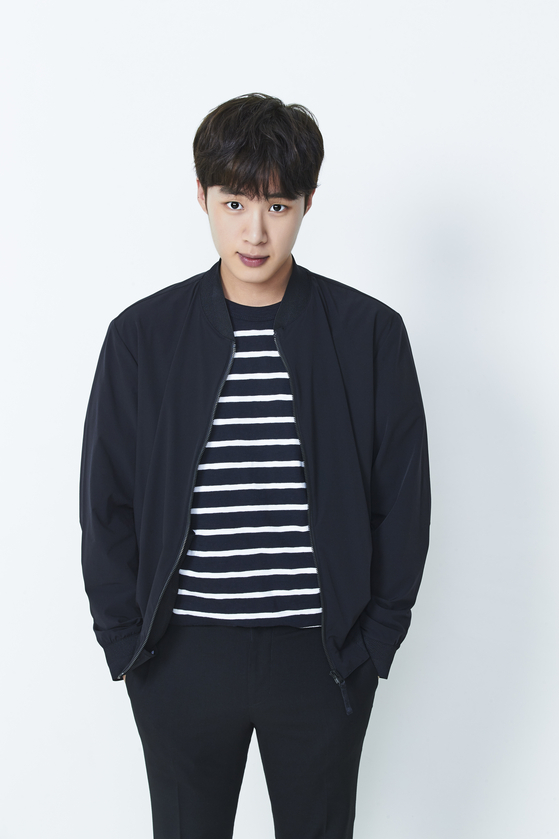 
“Dreams are expensive. It’s even more expensive for a kid without parents. Live an average life and die an average death. The money I need for that is 90 million won. That’s the price of my dream.”

These are the lines the actor Kim Dong-hee was given to read for his audition for the hit Netflix series “Extracurricular.” At that point, he had no idea what role he was going to play or what the story was about.

“It was sensational,” Kim said in an interview last week. “I first auditioned for the series without knowing anything about it — not even the title. I just received two lines from the script, but I was immediately curious about this character [Ji-soo] who puts a price on his dreams.”

Since the release of the first season on April 29, the crime thriller series has been one of the top ranked shows on Netflix in Korea. Unlike the youthful romances that are typically depicted in teen dramas, “Extracurricular” spirals down a dark path.

Ji-soo (played by Kim) is a model student at the top of his class. Shy and unsociable, he remains an outsider and is happy to stay that way, avoiding any trouble that might wreck his chances of going to a prestigious university. However, the way he pays for his studies and saves up for his college tuition is through working as a pimp for minors.

The show has been receiving positive reviews overall for its realistic portrayal of local high schools and the crime that teens may be involved with today. Before the "Nth room" scandal and sex trafficking ring that involved teenagers as both aggressors and victims, the public might have scoffed at the extremity of the crimes depicted on the show. But after the scandal, people no longer consider the story a stretch of the imagination. 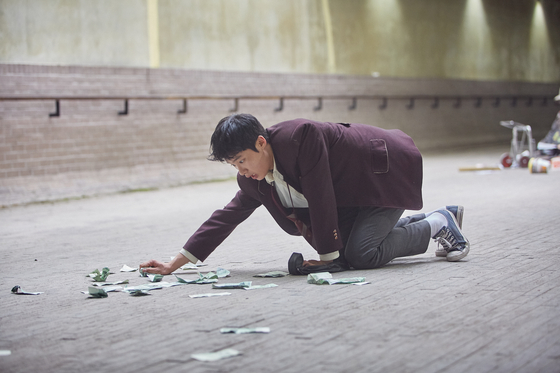 Ji-soo (played by Kim Dong-hee) picks up money that he earned through working as a pimp. [NETFLIX] 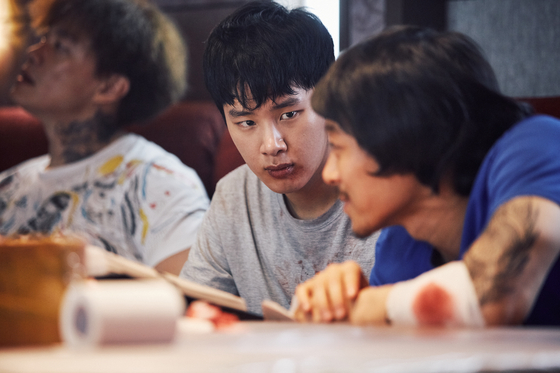 Ji-soo looks for a way out as his life hangs in peril. [NETFLIX]


Although Kim was worried about playing the lead in the series, he was never worried about the controversial message the series might carry as it was loud and clear what the series was trying to warn the public about.

“It was really tough. It was my first time playing a lead role — I was worried, but I was nevertheless excited and proud to play this role. But the central focus that I put into Ji-soo was his ambivalent nature in public places, like at school, and his individuality as a pimp,” Kim said.

“As the story hit the climax, I was worried about how to express his dramatic state when he’s on the edge and fearful about how I’d be portrayed on the screen, but no, I was never worried that the story might provoke a copycat crime [among teenagers] or it was simply too much. It was why the series is R-rated, and I simply hope that the story can have an impact on adults and encourage them to pay more attention to teens.”

However, the actor said that he had trouble relating to the character.

“I don’t think I could ever understand what he did,” Kim said. “That’s why I focused more on the situations and the predicaments that Ji-soo was in rather than trying to completely understand his choices and actions.”

In the story, there are adults who try to help the characters, but they always seem to be one step behind.

“What’s important is that we need to look after teens before anything happens, but I know that it’s not as simple as it sounds,” Kim said. “As I look back at my time as a teenager, I think I thought of myself as a grown-up too [like Ji-soo]. That delusion leads to misjudgments that could easily turn into crimes. There may be this whole society that adults are oblivious to, which is why we need to pay more attention to them.”

Kim debuted as an actor in the 2018 web drama series “A-Teen” and has appeared in various hit dramas such as “SKY Castle” (2018) and “Itaewon Class” (2020) on JTBC. However, this is his first lead role. When looking back on the Netflix series now, the actor describes it as his “first challenge.”

“[Ji-soo] was the most unpredictable character that I have had the chance to portray,” Kim said. “At the start [of the production], I couldn’t really conjure him up, and I didn’t know where he would run off to next or what he was going to do, even more so because we received scripts for the next episodes as we were filming.

“But I understand that Ji-soo’s desire for money came from his father,” the actor said. “His father was a compulsive gambler, and seeing how his father would earn money illegally must have affected Ji-soo too.”

After “Extracurricular,” Kim had wondered about how he could contribute or lend a helping hand to teens in need today.

“I’m 22 now, and they’re are only couple of years younger than me, so I do spend a lot of time nowadays thinking about how I can help them,” Kim said. “But it’s a load that I’ll have to carry for now. I believe that I need to become an honest adult first, so that [when I’m ready], I can face them without any kind of guilt or embarrassment.”