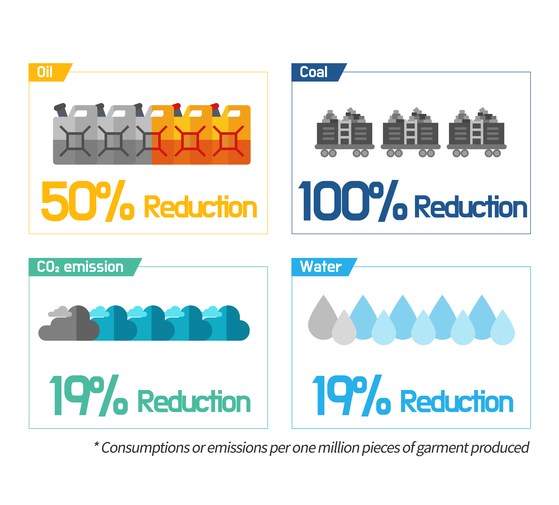 
Hansae, a global apparel manufacturer, has successfully executed its eco-friendly strategies through its ongoing efforts.

To take part in the global effort to protect the environment, Hansae implemented its own environmental policy called “Hansae 2020” in 2015.

As part of the policy, special facilities were established for the sake of increasing energy efficiency and reducing the amount of energy the company uses.

The Hansae Advanced Manufacturing System, or HAMS, was established to increase energy efficiency in the manufacturing process. A rain water harvesting system which enables factories to reuse rain water and a water cooling system for controlling the temperature in the workplace were also established to limit the amount of water usage significantly.

In addition, the company increased its use of biomass fuel instead of fossil fuel to reduce greenhouse gas emissions.

As a result, Hansae was able to save more than 350,000 liters in oil consumption and 120,000 liters of water. Coal was no longer needed for the first time since the company stopped using it in production four years ago and greenhouse gas emissions were reduced by 19 percent. The reduction of water and coal was especially impressive since it exceeded the company’s original goal.

Through these efforts, Hansae was able to fulfill its duty to protect the environment and increase its production efficiency at the same time.

Beside this, Hansae has launched “10% For Good” campaign in which it donates 10 percent of its net income from all the sustainable orders to environmental organizations.

“As a global fashion clothing company, we strive to save energy and minimize pollution by establishing an environmental control system,” said Kim Ik-hwan, the vice chairman of Hansae.

“We will actively participate in global programs such as carbon disclosure projects to encourage transparency in an environment management system and continuously make an effort to protect the environment.”

Hansae was established in 1982 and boasts 23 subsidiaries in 8 different countries including United States, Vietnam and Indonesia, with more than 30,000 employees worldwide. With consistent research and development efforts along with active business expansion, Hansae is transforming itself from an original design manufacturer to a creative leader in the industry.