Let Doosan do what it does best

Let Doosan do what it does best 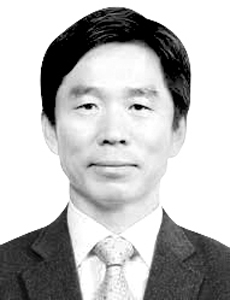 Jeong Jae-jun
The author, a former member of the Nuclear Safety and Security Commission, is a professor mechanical engineering building at Pusan National University.

In February, Doosan Heavy Industries & Construction has informed its union about an inevitable shutdown after it lost 10 trillion won ($8.2 billion) worth orders due to cancellation of construction of new nuclear- and coal-powered generators under the government’s energy policy. Doosan’s snowballing debt is also attributed to its over-expansion during its heyday.

State lenders Korea Development Bank and Export-Import Bank of Korea came up with an emergency loan package worth 2.4 trillion won to save the power equipment maker in return for rigorous restructuring. Doosan is reportedly drawing up additional cost-saving and streamlining measures.
The company has already shed 650 employees after receiving early retirement applicants from 2,600 workers who are aged 45 or older. The management says the company needs additional streamlining, but the union strongly resists.

Doosan faces other woes too. Environmental groups petitioned for audit by the Board of Audit and Inspection into the company to oppose the government’s public fund assistance. They found fault with funding to a coal-fueled generator producer, as it goes against climate change commitments. They even demand retraining of nuclear reactor engineers to transfer them to wind power projects. If there had been any prospective businesses, the power equipment company would have invested in them.

Doosan’s future is bleak. Its decades-old reactor supremacy is at risk of collapsing as a result of the Moon Jae-in administration’s nuclear phase-out policy. The company’s fall must not be deemed a natural outcome in a market economy. Doosan’s troubles are largely due to the government’s rash shift in energy policy. Its doom can have huge ramifications on our economy.

Doosan’s orders from partner suppliers sank 40 percent last year from the levels of 2016. Over 200 small- and medium-sized companies are on the brink of going bankrupt. The industry’s troubles do not simply end with them.

Doosan was responsible for producing key equipment for over half, or 14 out of 24, of the nuclear reactors in Korea. The products include reactors, turbines, generators, control devices and coolant pipes. The company also supplied key equipment to eight new nuclear reactors under construction in Korea and the United Arab Emirates. Losing specialized engineers can be damaging to the company and the society. 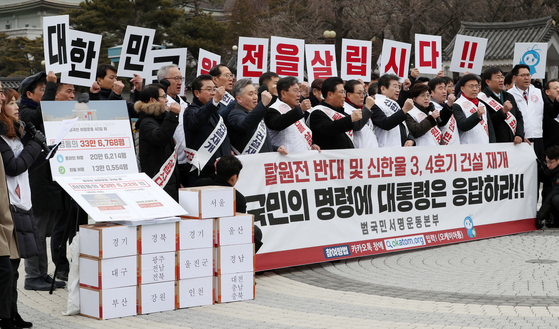 Opposition lawmakers and a civic group supporting nuclear energy urge the Moon Jae-in administration to resume the suspended construction of Shin Hanul nuclear reactors Units 3 and 4 in a rally in front of the Blue House last year. [NEWS1]


The safety and quality of nuclear reactors hinges on persistent maintenance and repair. Regular supervision and maintenance is essential. Upscaling and timely replacement of key parts also is important. Reactor operators must maintain a close partnership with the makers.

If Doosan and its supply chain collapse, Korea Hydro & Nuclear Power — which is responsible for overseeing nuclear reactors — also could run into trouble. It would have to seek out foreign companies whenever problems occur in any of the reactors. It won’t be easy to find parts for Korean reactor models from overseas suppliers. The risk could undermine the operation of reactors and their safety in Korea. The plan to phase out of nuclear energy simply because of potential dangers can cause more danger than otherwise. Electricity bills will jump if reactors cannot be relied on. Exports also would be unthinkable.

The troubles with Doosan won’t end with an emergency bailout or restructuring. The government must let the company do what it does best.

The government vowed to create 550,000 jobs to restore the economy after the coronavirus fallout. Instead of making up temporary jobs, it will be even more effective to allow resumption in the construction of Shin Hanul reactor units 3 and 4. The projects can generate 8 trillion won in revenue and add 6 million jobs a year. The safety and utilization rate of reactors also could be enhanced. Jobs at Doosan will be secure, not to mention the country’s reactor technology.

Energy and housing at the top of list for new president