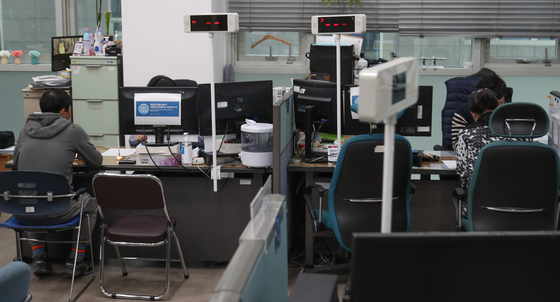 Small business owners apply for loans at the Small Enterprise and Market Service's branch in Seoul in April. [YONHAP]


Corporations are relying heavily on bank loans to stay afloat during the coronavirus pandemic, according to data released by the central bank Tuesday. Their debt financing was largely backed by a slew of supportive measures released by the government and lenders over the past two months to avert a possible credit crunch.

Corporate loans outstanding totaled 929.2 trillion won as of the end of April. 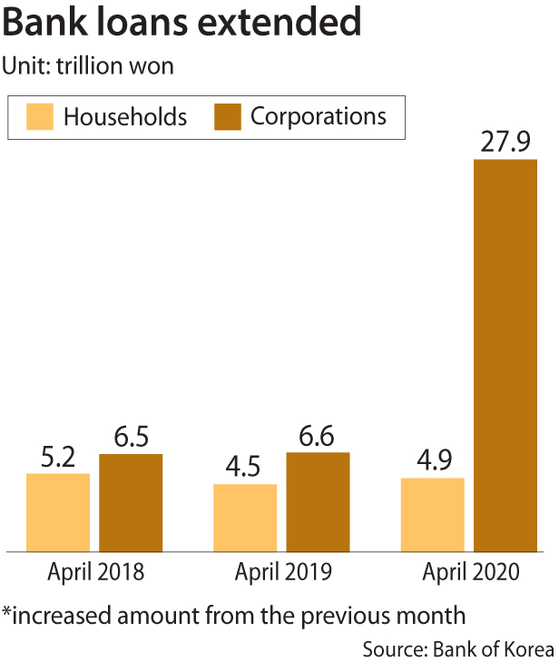 Loans to SMEs increased nearly threefold in April compared to the previous month’s 8 trillion won as a contraction in consumption in March started to hit revenue in April.

The increase in household debt slowed in April compared to the previous month mainly due to a slowdown in stock investment as the local stock process started to stabilize.

Home purchases and jeonse, where tenants provide a lump-sum deposit to the homeowner for a long-term lease, dropped in March. While an average of more than 10,000 houses were traded last year per month, the figure dropped below 4,000 units in March.

Other loans, which include credit loans and stock-backed debt among others, dropped by 100 billion won in April compared to the month before. In March, these loans increased by 6.3 trillion won, largely due to frenetic buying of local shares.

"The impact of Covid-19 held back household consumption, dragging down demand for credit which before was in much need when they needed to pay off their credit cards.”

Loans to households decline for a third straight month