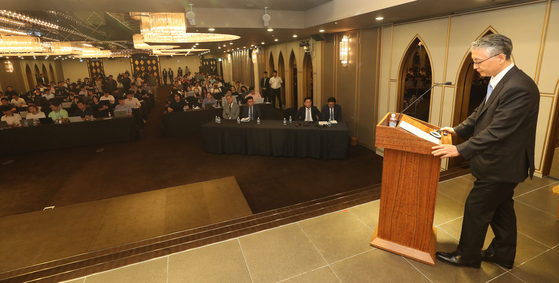 SillaJen CEO Moon Eun-sang speaks in August during an emergency press conference on the failed clinical trial for Pexa-Vec. A local court issued an arrest warrant for Moon Tuesday on charges of being involved in insider trading. [YONHAP]

SillaJen CEO Moon Eun-sang was arrested Tuesday on insider trading charges, after he allegedly sold millions of shares in the biopharmaceutical company just before a failed clinical trial caused the stock price to tank in August.

The company's stock price plummeted in August on the news that Pexa-Vec, SillaJen's anticancer drug candidate, had failed its Phase 3 clinical trial.


Before the announcement, Moon had sold 2.92 million shares of SillaJen and made around 250 billion won ($204 million). Moon is also suspected of illegally increasing his control of SillaJen through a shell company in March 2014.


SillaJen debuted on the secondary Kosdaq in December 2016. The Korea Exchange is expected to announce May 29 whether the company should remain on the Kosdaq after indefinitely suspending trading of SillaJen shares on May 4 in response to the allegations of criminal conduct within the company.